I hoped that with the potential that existed within the squad, and the boost of several summer signings, we would be able to close the gap between ourselves and the clubs above, with perhaps the boost of a decent cup run.

However, as noted in my review of the previous season, there were misgivings about whether Claude Puel was the manager to see that potential fulfilled.  Sadly, as events transpired, those doubts proved well founded.

The news of the helicopter crash hit me particularly hard. I had the honour of welcoming Vichai and Top to their first home league game in August 2010.  I'm not sure whether they knew what they had let themselves in for, but the subsequent eight years or so proved to be some journey!

Years later, I had the privilege of meeting Vichai again, as well as two of his aides (who perished with him in the crash) before the Champions League game in Bruges in 2016.  The joy he took in that momentous day was evident for all to see.  After all, he did more than most to make it possible.

Vichai gave everything that fans of any football club could wish for.  He provided financial stability, battled to protect our interests whenever he needed to, and resisted the temptation to cut and run  – which many other owners may not have done – during some challenging times in the early years. His patience was rewarded many times over.

The incredible turnout on the “Walk for Vichai “ before the Burnley game showed the depth of gratitude that the whole city, not just the club fanbase, had for him. 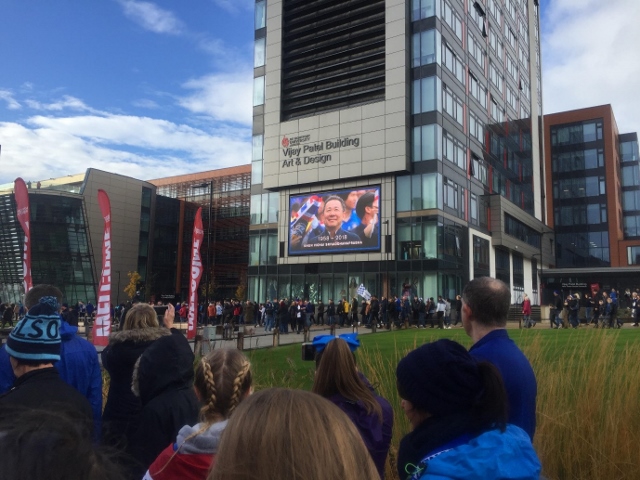 Everyone at the club deserves appreciation for the dignity and respect they showed in the aftermath of the crash, especially in response to the massive global media interest that ensued.  They did him proud.

Given the events of last season what were your overall thoughts on finishing 9th ?

Considering the impact of the crash, and then a particularly ignominious FA Cup exit, 9th place is about as good as we could have hoped for.  We competed well against the biggest teams, beating Manchester City and drawing at Liverpool, but this was too often offset by indifferent displays against teams in the lower reaches of the league.

Ricardo had some awkward games early in the season, as he struggled to adapt to the Premier League, but he gradually found his feet and over the course of the season was probably our most consistent player.  So I'd say he was certainly a worthy choice as player of the year.

Elsewhere in the side, Jamie Vardy went through a few turbulent times, but ended up as the league's top English goalscorer, finishing fifth overall in the race for the Golden Boot.  James Maddison and Wilfred Ndidi also came through difficult spells to post some impressive stats which won't have gone unnoticed by potential predators.

As in previous seasons, some proved to be more successful than others.  Ricardo and Maddison made a positive impact, Jonny Evans overcame a tough debut to become a solid figure in central defence, while Youri Tielemans added quality to the midfield during his loan spell.

The jury is still out, though, on Caglar Soyuncu, who didn't quite meet the expectations that went with his price tag.  Filip Benkovic had rave reviews when on loan at Celtic until injury halted his progress.  Rachid Ghezzal made a bright start with a couple of early goals, before finding the task of filling Riyad Mahrez's shoes too much for him.  Danny Ward looked good in the penalty shootouts against Wolves and Southampton, but couldn't repeat the heroics against Manchester City and was another who remained on the periphery of the squad.

Last year the notion of Ben Chilwell emerging as an established left-back for the national team would have been met with widespread incredulity among the City fanbase.  Yet, in the early weeks of the season, it was clear that he had put considerable effort during the summer into improving both his fitness and his overall game.

When the call-up came, he seized his opportunity and played a full part in some exceptional England performances.  There are still some areas where there remains room for improvement, but it is to be hoped that he retains his position for both City and England for some time to come.

In addition, Hamza Choudhury and Harvey Barnes both performed with distinction and show every signs of following Chilwell into the full national side in due course.

Demarai Gray was given numerous chances in a variety of positions by the former manager, but rarely looked comfortable in any of them. It was hoped that during his fourth season at City, he would finally start to fulfil his potential, but he continued to frustrate with a lack of end product.  Maybe a change of environment, to a club indulging him a little less, would be in the best interests of all.

Kelechi Iheanacho was another major disappointment, with just one league goal all season (and even that was against Huddersfield).  He's never settled since joining the club and although he has the quality and finishing ability to become a decent Premier League striker, it's highly unlikely that he will do so in a Leicester shirt.

Wins at Chelsea don't come around too often, so our victory there was something of a Christmas bonus, especially as the side had been struggling desperately for form during the preceding weeks. It was a fortress which no other visiting side could breach during the league campaign, so to outshine the top two was an especially worthy achievement.

I'm cautiously optimistic that if he has a full pre-season to work with this squad, we will see a significant improvement in results.  However, much depends on whether he can keep hold of key players and if not, whether he can secure – and successfully integrate – adequate replacements.

The biggest challenge facing the manager – and one that has played a significant role in the downfall of his three predecessors – is how to expand the attacking options within the squad. Many of the players recruited since promotion, including some purchased at considerable expense, have proved to be incompatible with existing personnel.

The priority in this transfer window should be to bring in players who know their way around the league, and are able to assert themselves in what can sometimes be a challenging dressing room.

If we are unable to sign Tielemans on a permanent basis – as appears to be the most likely outcome – then I'd be content for the club not to make a big signing during the summer, and instead look to bring in additions from more modest areas of the market.

There were times last season where the balance we needed between youth and experience wasn't there.  Some of the older players brought in weren't able to settle, while others who had served the club well in their time were no longer able to perform at the level we required.

While we need to be seen to give young players a chance – not least to encourage recruitment for our academy – fielding too many in the side has an adverse effect on results and confidence.

The manager and the team of staff he has working with him should have enough knowledge of what is needed to fill the current gaps within the squad.  There are a number of experienced former international players looking for a new Premier club right now and if it is felt that one or more of them could fit in at City, I'll be happy to welcome them.

One prospect who caught the eye in the lower leagues was Che Adams of Birmingham.   A lifelong Fox, he's a pacy finisher in the mould of Jamie Vardy and would be well-placed to take over the reins as the main striker when the time arises.

It's certainly a viable possibility, with several of the elite clubs currently going through a period of upheaval both on and off the field.  But the competition will be fierce, with Everton, Wolves, West Ham and perhaps Newcastle also likely to be in the mix.

Even before last season's nightmare at Newport, our recent record of underachievement in this competition had become an embarrassment.  A succession of managers had made it evident they didn't see the cup as a priority and this often filtered through to the players.

However, if Brendan Rodgers is to leave the legacy that he hopes for at City, this should be his prime target.  With over 50 years since our last appearance in an FA Cup Final, a return appearance is long overdue.

I'm glad to see the introduction of VAR for Premier matches next season, but, having seen its operation in UEFA competitions, would like to see it restricted to correcting clear and obvious errors.  Its use in correcting the most marginal offside calls, often to the disadvantage of attacking teams, places too much of a premium on the accuracy of technology.

I also hope that this will be the season when the club finally.proceeds with plans to expand the stadium.  If we wish to continue as a top-10 Premier club in the medium to long-term, we need to ensure that our fanbase – and hence our revenue streams – is sufficiently competitive to allow this.

Finally, as stated in previous reviews, I feel the club should have nothing to do with the Checkatrade Trophy in any way, shape or form, especially given the recent emergence of alternative competitions for our development squad to take part in.