Lunch break was spent viewing the wide range of products and materials exhibited at the event as well as spending valuable time networking with other trusts, establishing contacts etc.

Again headed up by Dave Boyle Deputy Chief Executive of Supporters Direct, this covered Community Interest Companies and detailed what they are and how they could help the Trust movement achieve its goals. Again, for further details on this workshop please refer to the separate article on the conference by John Adcock, who has written a brief resume of this workshop. For more details on this Community Interest Companies please refer to www.batesweston.co.uk

Lead by Tim Thomas, Associate Partner at Cobbetts Solicitors Charnwood, this covered aspects of Employment Law and detailed information for those trusts who are now moving into the area of employing staff to perform trust functions.

As our members are well aware, at present all FT roles are undertaken on an entirely voluntary basis and it is anticipated that this will remain the case for the foreseeable future.

Entitled Trusts at larger clubs, this basically covered how the Trust organises itself when there is little likelihood of it owning the club in the foreseeable future.  In was chaired by James Proctor, Development Officer for Supporters Direct in Scotland with the following speakers 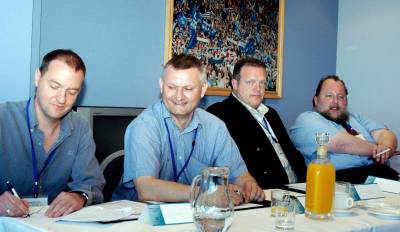 Mainly concentrating on the interaction (or otherwise!) and relationship with the actual football club, this workshop also tackled the various ways that Trusts in this position seek to recruit and retain members.  As well as being able to take away various learning points to put into operation at our club, the overall point that was hammered home to me was how healthy our own Foxes Trust relationship is with Leicester City (& visa versa) compared to other clubs, who were extremely envious of the interaction established between club and trust supporter here at Leicester City.

The final article of the Regional Conference will look at the closing debate and get the personal viewpoint of the day from Foxes Trust Board Community Board Member John Adcock.