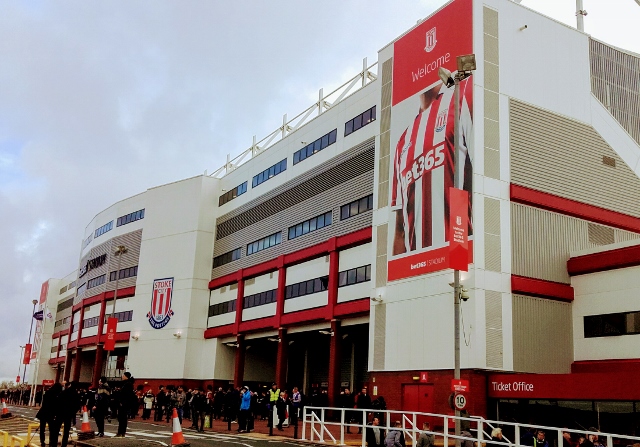 Take the A50 to Stoke-on-Trent. Exit at the last slip road on the A50 with the stadium on the left. Take the third exit (straight on) at the first roundabout and third exit (right) at the second to reach the stadium.

On matchdays, access to the Britannia Stadium is strictly limited to vehicles with parking permits for car parks NORTH, WEST 1 and WEST 2.

Supporters who are allowed access from the A50 should follow signs which indicate coach and disabled parking.

Car parks will open from 11.00am for an afternoon match and from 4.00pm for a night match. Access to the car parks is available from the A50 and the junction for Stanley Matthews Way on Trentham Road (A5035).

There may also be 300 parking spaces available (weekend matches only) at the Screwfix direct site on Stanley Matthews Way. The site is based one mile from the ground and allows quicker access back onto the A50 after the game has ended. If arriving from the M6, follow signs to the Bet365 Stadium on the A50.  Continue past the stadium for approx 1 mile and the Screwfix site is on the left. The post code for SatNav's is ST4 8GR.

There is also car parking south of the stadium on Stanley Matthews Way between Screwfix and the Stadium opposite Pets at Home (Sat Nav ST4 8GR ). You can get to this car park via Stanley Mathews Way from the A50 or Trentham Road. After the match all traffic goes south which means you avoid all the congestion by the stadium

Stoke-on-Trent station is situated on the West Coast Mainline and provides easy access from Manchester, Birmingham, London, Derby and Crewe.

Supporters arriving by train on a matchday can take a two-minute walk to Glebe Street in Stoke town centre where buses run to the stadium at regular intervals. Turn right out of the station and take the next right to go under a bridge. Follow the road to the end and turn left, down a bank and into Glebe Street. Buses depart on the left hand side by the St Peter's Church.

There are a number of bus services that run through Trentham Lakes and past the Britannia Stadium all week long.

On a matchday, there is an increased level of buses which travel to and from the stadium.

Next to the stadium are a Holiday Inn and a Harvester Pub/Restaurant that do allow in away fans. You can also park at the Harvester itself for a cost. A bit further away on Dennis Viollett Road (off Sir Stanley Matthews Way) is a Power League complex that also has a bar, which also allows in away supporters, shows SKY television and you can even park in their car park for a fee. Further down Sir Stanley Matthews Way (and turning left along Eastern Rise) is the Longton Rugby Club, which has two bars also showing SKY Sports. Parking is also available for a fee. It is around a 20 minute walk to the away turnstiles from the Club.

If arriving by train then the Terrace Bar on Leek Road has been designated as an official away fans pub. The pub which is only five minutes walk from the railway station (turn right out of the station entrance, left at the crossroads and the pub is down on the left) also shows Sky Sports and offers food too. The shuttle bus to the ground (return cost £3 adults) that runs from near the station, also stops at the pub and returns after the game.

All information is provided in good faith but the Foxes Trust cannot be held responsible for any errors. Thanks to the Football Ground Guide, and Stoke FC