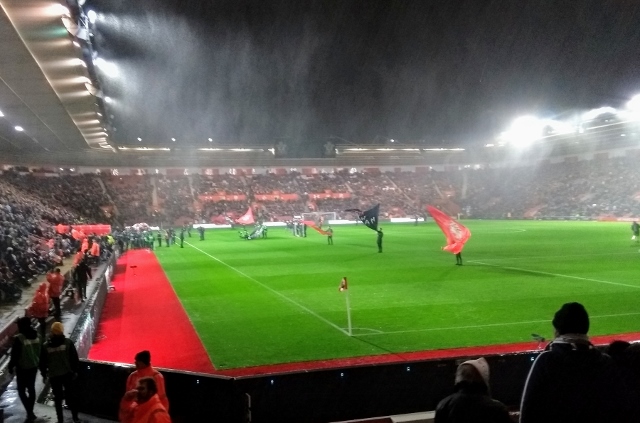 The eerie walk through St Mary’s dark churchyard, the dimming and flashing of the arena lights, and the wind and rain swirling over the stadium roof; had All Saints Day eve come early? The storm may not have been of biblical proportions, but the size and manner of the defeat that The Saints endured certainly was: Halloween arrived for Southampton fans on the 25th October this year. 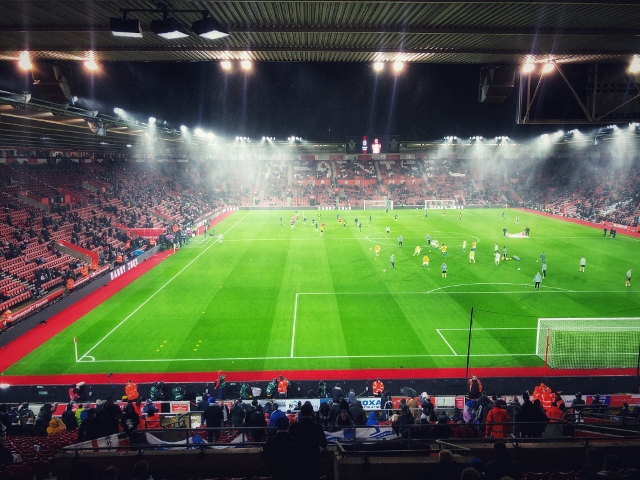 Appalling as Southampton were, and they were, no team can score nine goals without being excellent, and City were just that and more. In 1964, the year I saw my first City match, they scored 8 against Coventry in a League Cup match. I wasn’t at that match, and until Friday night I had never seen them score more than 6 goals in the League at any level; I don’t think many will have done.

I was telling my 7 and 9 year old grandsons this at half time and then, reflecting afterwards on the match, thinking that in their young years they have seen City win the Premier League, record their record win in the PL 5-0 against Newcastle and then this: In a 131 years of top flight football, record the biggest ever away win 0-9. The records kept mounting up, equalling both the highest ever score in the PL and also the highest ever interval score 5-0.

They have also seen Jamie Vardy score 11 PL goals in a row. 37 years ago, I saw a young Gary Lineker and Steve Lynex both score hat-tricks in a 6-0 win against Carlisle, although their tally included 3 penalties (1 Lineker, 2 Lynex). Perez and Vardy hat-tricks in the same match was only the second time this had happened in the existence of the Premier League after Arsenal achieved the same, also against The Saints.

The team was unchanged from the previous Saturday against Burnley, setting up as 4-1-4-1.  City started well, straight into their stride and passing game although both sides were testing and respectful to the wet pitch and the swirling wind.

The 10th minute was significant in the match but there is no reason why it should have had such an impact. Bertrand mis-controlled the ball and fouled Perez in trying to recover it, as the ball broke to Ndidi, referee Marriner let play move on. Ndidi shifted the ball right to left where the oncoming Chilwell tried a first time shot that he seemed to miscue. The ball however was a perfect pass to Barnes who himself shot first time. Gunn in the Southampton goal only parried the ball to Chilwell who made no mistake second time as he stroked the ball into the net. 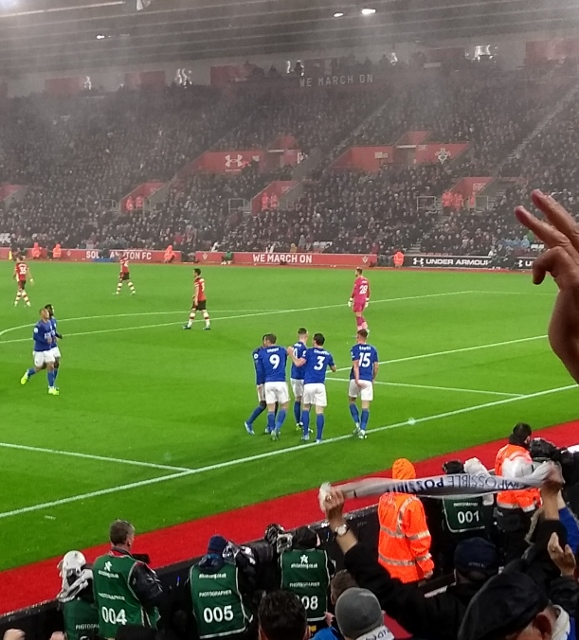 Then the dreaded VAR, not for the goal but for the Bertrand tackle that preceded the build up to the goal. This time VAR did what everyone wants it to, the video assistant deemed the foul worthy of a red card and the replay on the screen in the stadium was met with a collective ‘aawww’ which confirmed the view that the colour of the card was correct: the fans knew clearly why the red card decision had been made and saw it evidenced. 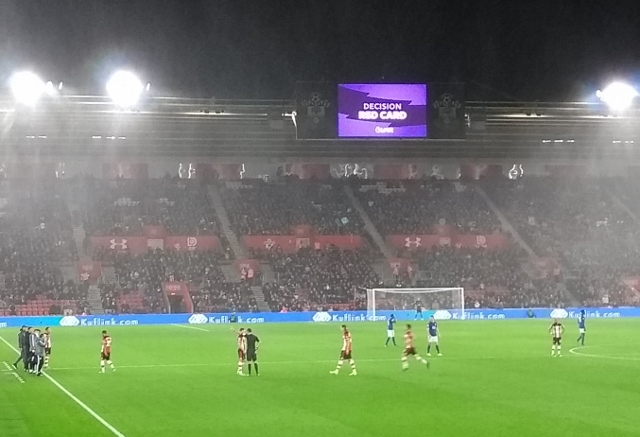 Last season City lost Harry Maguire to a red card in the second minute of the match at Burnley; they brought on Morgan immediately, picked themselves up and the 10 men went on to win. The exact opposite happened at Southampton, no changes were made and heads dropped immediately. Eight minutes later and the damage was irreparable. By then good interplay by Chilwell and Barnes led to a pass that Valery could only help it on its way, the ball fell to Tielemans and he stroked the ball beyond Gunn to make it 2-0 after 17 minutes. 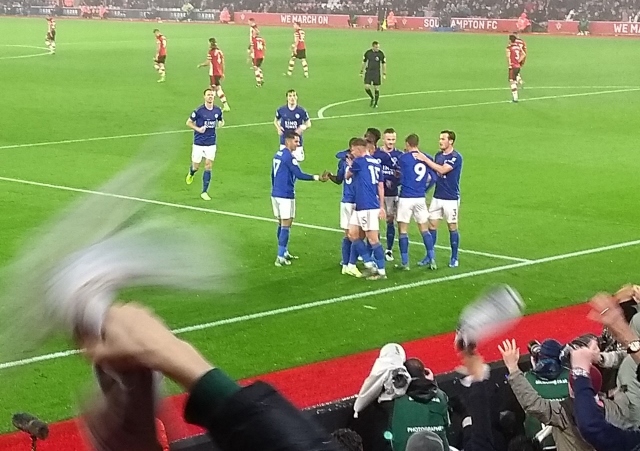 Two minutes later and a run by Perez, and a beautiful wall pass from Tielemans, put the former through and he buried his shot near post for his first City goal. The thought that Perez needed a goal to spark his City career was to be evidenced as he turned in a man of the match performance. 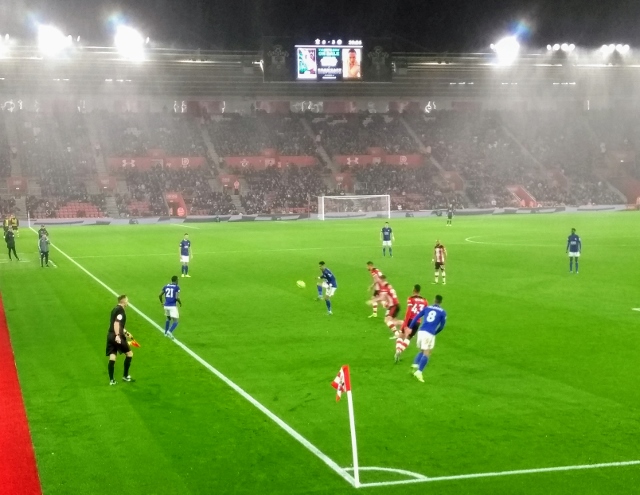 If this was to be the signal for some Saints fans to leave then the fourth goal on 39 minutes was to start an avalanche of departures, so reminiscent of the Silencing of The Rams at Pride Park. Chilwell was the provider, he floated the ball up to the back post for the inrushing Perez to get his second as he hammered a half-volley into the roof of the net: a difficult technique in good conditions let alone these.

The micky taking then started as City fans started singing ‘When the Saints go marching out’ as the stands emptied. In turn, the home fans sang ‘Manchester City, we’re coming for you’ with ironic reference to their next two away games, both at the Etihad. To be fair to the Saints fans, they sang their heart out in an effort to get their team moving, unfortunately for them, their songs fell on deaf ears.

No Leicester party is complete without Vardy. The centre forward had endured chants about his wife being a grass and had the ignominy of seeing a run end with a screwed shot that missed the target by 20 yards. But not to be denied, on the stroke of half time Vardy delivered. Another Chilwell centre was helped on its way by Ward-Prowse. It fell to Vardy who instantly controlled the ball, dragged it back and shot, all right foot, all poetry in motion. 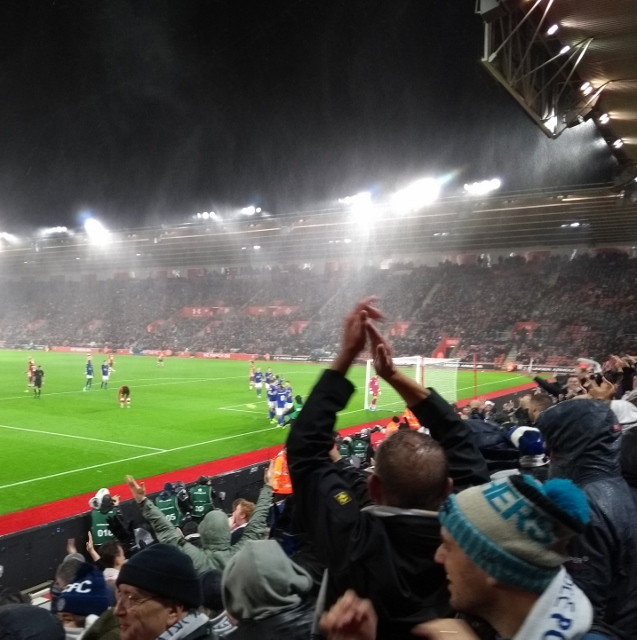 Half time came and it was an opportunity to get out of the rain for 15 minutes, and warm up. The pitch was taking the rainwater well, no fear of the Stevie Lynex breast stroke against Southampton at Filbert Street. The teams had taken the opportunity to change their kit for a dry version, it appeared that Rodgers had taken the interval to tell the players to ‘play like men, not boys’. The players heeded the manager’s words as they continued in their relentless vein, doing the right things, and definitely no showboating.57 minutes Perez got his hat-trick as a deft pass from Barnes found the striker unmarked and six yards out, neat control and the ball was past Gunn.

A minute later and Barnes feeds Chilwell who from the by-line chipped the ball back to Vardy for a well-executed header into the back of the net, again no challenge from a defender. Apparently, Johnny Evans had informed the side after the sixth goal what the record score was, they now needed two goals in the last 30 minutes.

It was on the customary 60 minutes that Khun Vichai was remembered yet again. There was a scarf on every City seat and these were held aloft as the Chairman’s song was sung. A victory of this magnitude was most fitting.

The only chance of note from the home side came in the second half when Schmeichel parried a Redmond shot to safety. Schmeichel was playing his 500th senior appearances and to add to the record was only the second keeper to keep a clean sheet in a 9-0 PL rout, the other was Peter.

The two goalkeepers Schmeichel and Gunn were the first two keepers to play in the same game whose fathers had also both played in the PL.

It had been damage limitation for Southampton since half time and they were packed back making chances more difficult to create as City worked the ball wing to wing looking for an opening. It was not until 85 minutes that goal number 8 arrived. Vardy working his way across goal was partially sandwiched between two defenders and the free kick was awarded. Sometimes goals from free kicks looked inevitable. The angle was right, the distance good, the keeper a little too far over to his left and sure enough Maddison didn’t disappoint.

It looked as if the away score record would not be beaten, until the last pass of the match. A long ball from Albrighton from the touchline found Vardy bursting into the box. He controlled the ball getting his body between the defender and the ball. Crashing to the ground, Vardy picked himself up and dispatched the resultant penalty for number 9, cue his hat-trick and the final whistle. 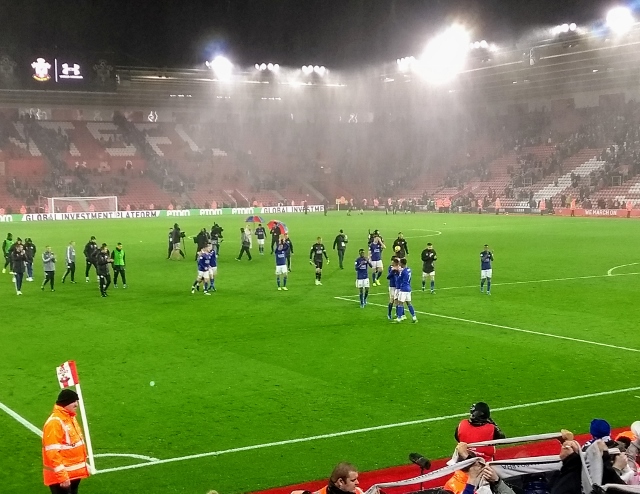 In an almost empty stadium only the City fans remained, virtually none of them had left. Now in far happier times it was to be a repeat of the Cardiff City scenes of 12 months ago as the whole of the first team staff to move down to the supporters and both sets mutually applauded each other, this time in joy not grief as ‘Vichai, Vichai’ rang out. 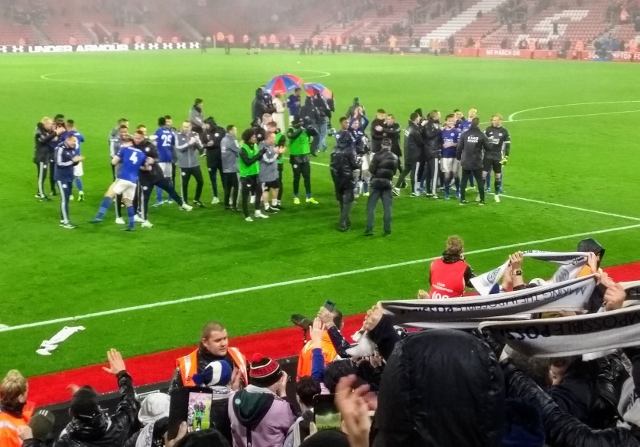 Due to the nature of the PL standards set by Manchester City and Liverpool, this City team could get more points than the 2015/16 title team and fail to get anywhere near the title. To even think that is to reflect how far the Club has come, to have aspirations that Ranieri’s Immortals may not have been a one off is so exciting. There is a long, long way to go but to see week in week out a dominant City side with the greater possession, controlling the game and playing exciting attacking football is testimony to hard work behind the scenes in securing talented players, a good academy and superb manager. The players are united and the old smiles back on faces.

One final thought, didn’t BR leave Celtic to get away from these uneven matches with cricket score results?