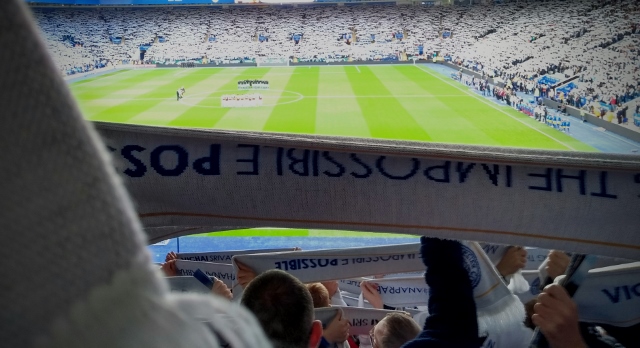 An emotional day at the King Power stadium ended on a high as City battled their way to another three points which lifted us to the dizzy heights of third place in the Premiership (actually second for a couple of hours or so).

The day was dedicated quite rightly to the memory of the late Chairman, Khun Vichai, an immensely popular figure in his lifetime and beyond. All City fans know that without his commitment and vision the club would not have progressed as it has and thanks to his son, Top, continues to progress on and off the field.

Many took part in the pre-match Second Walk for Vichai, followed in due course by an impeccably observed minute’s silence and the singing by the massed ranks of the song ‘Vichai had a dream,’ repeated in the 60th minute of the game. When you see what is happening at some other clubs you realise the immense contribution Vichai and his family have made to this club and this City. One simple example: a friend recently sent me a photo of two Leicester City Fanstores – both in Bankok airport! 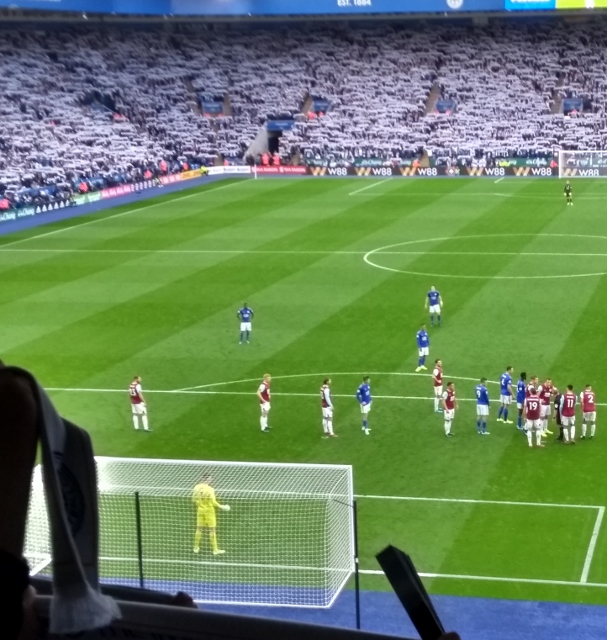 By a strange quirk of the fixture list Burnley, City’s opponents on the first home game after that fateful day, were also the opposition for this fixture. The Burnley fans were brilliant that day and beyond and equally so today albeit in rather limited numbers. They blotted their copy book just once in teasing Jamie Vardy that his wife ‘is a grass’ but as we might have predicted he was to have the last laugh. 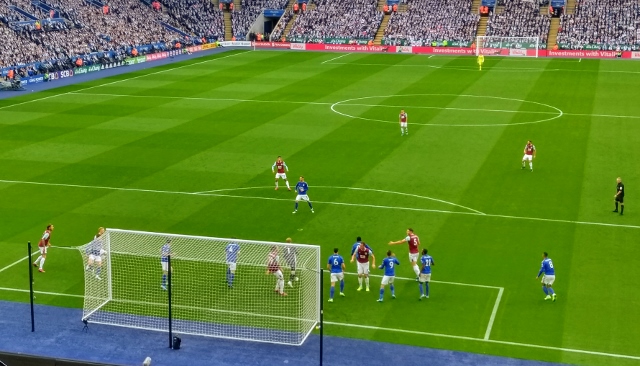 This was always going to be a tough ask as Burnley have some good players, though without the influential Barnes, a good manager and excellent team spirit. Like the Foxes they never quit. So you don’t want to go a goal down to them as we did midway through the first half during which we had the great majority of the possession -is there any footballing statistic less indicative of the likely outcome of the game?

City opened well and played some wonderfully intricate one-twos but created little in the way of a clear chance. The nearest we came was when Barnes scuffed a shot from a decent position in their penalty area and Maddison’s follow-up attempt was kicked off the line. Vardy almost got through on the left but eventually the angle was too acute and his shot hit the side-netting.

Burnley in the other hand were not without attacking intentions but favoured the long ball up to their front two. Halfway through the first half this ploy came off! A right-wing cross saw Chris Wood stealing between Evans and Soyuncu to head into the top corner of Schmeichel’s net. I have to say that on recent evidence we made a big mistake letting him go. He seems much more of a threat than either Slimani or Iheanacho ever will be – and they cost many times more! Credit to Sean Dyche for picking him up cheaply and developing him as he has. He was a threat throughout the game and could easily have added to this single goal 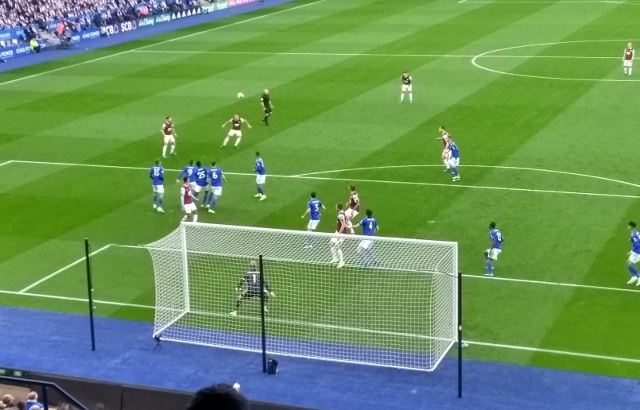 City and their fans redoubled their efforts to break the Clarets down and succeeded on the cusp of half-time –  a psychologically good moment to score. The creator was Harvey Barnes who in all honesty did not have the best of games though involved in both City goals. He beat two men in a tight position very wide left and crossed superbly for a leaping Vardy – surely he is 23 not 32 – to head into the net with power and total conviction. Lovely goal! Naturally Vardy popped over to the visiting fans to receive their acclamation! 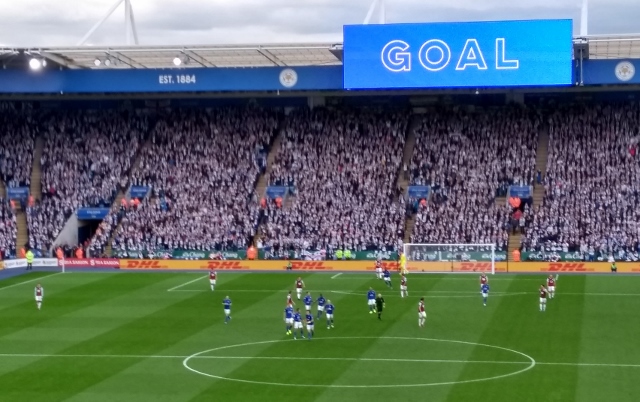 The second half required effort, belief and above all patience, the latter made more difficult by Burnley efforts to slow the game down, something they ultimately regretted. The pattern of play was similar to the first half with no clear chances until the 74th minute. After some interplay wide right sub Gray delivered a fierce raking cross. Barnes jumping athletically – and at some personal peril – allowed the ball to pass between his legs and across the box to the far post where the lurking Tielemans took a touch before smashing the ball in off the underside of the bar. 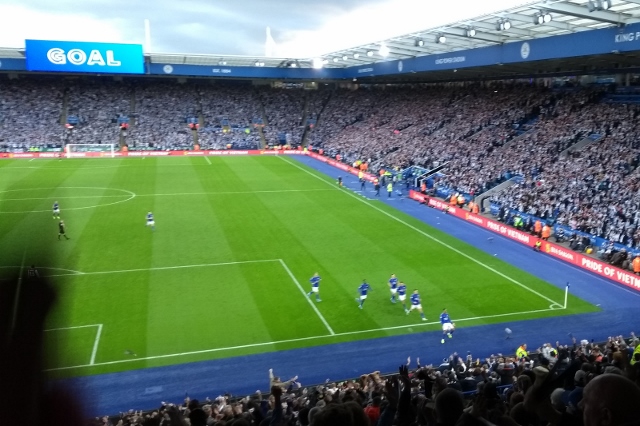 Before long City made a defensive substitution taking off Barnes and bringing on Morgan, a rum decision I felt. The idea presumably was to play three at the back with wingbacks but it quickly morphed into five at the back as Burnley gained the attacking ascendancy for the first time in the match. We simply could not get out of our own half! The whole thing seemed to have back-fired when Wood seemed to have scored the equaliser just before the end. Once again Wood got goal-side of the centre-backs and Schmeichel did really well to block his shot from virtually zero range. The ball rebounded off Wood and bounced at no great pace towards the City net.

My immediate view at the time was that Evans would hook it away but he went crashing into the net taking the ball with him. Burnley showed their delight but Wood significantly was very subdued and Evans was soliciting referee Moss (Yes, my favourite!). It was soon clear that this would be a VAR moment (except the interminable delays associated with VAR could never be described as moments!). Ultimately to the great delight of the home fans the goal was disallowed, Wood having inadvertently clipped the heels of the covering Evans as he went to clear.

A correct decision but even a correct decision shows that the authorities are a long way from getting VAR right. It takes too long even with objective decisions like offside, there is insufficient crowd communication and why have pitch-side screens if refs never use them. Above all what is the point of celebrating goals which may turn out not to be goals. It’s getting like the Brexit referendum – you can’t rely on final decisions anymore.

Fortunately, there were no further anxious moments and there was the happy ending the day demanded 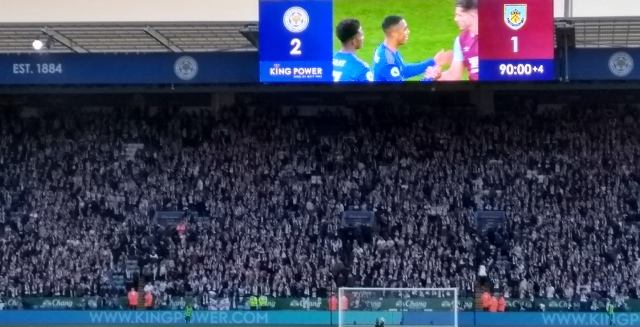