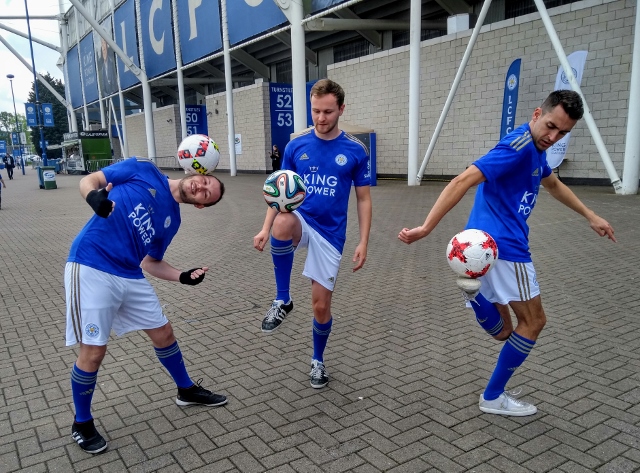 Post match opinions differed. Mainstream media saw it as a gentle end of season stroll. Brendan Rodgers, on the other hand, called it “a very good game.” Both sides certainly had chances to score but a point apiece was the right result.

Before the game fans’ attention was on Alan Birchenall and his helpers. For the 39th year Birch was fund raising for charity at the final game of the season  –  this time for Vichai’s foundation. The efforts of Birch and his team drew warm applause around the stadium and in this season of the Chairman’s death served as a fitting reminder of the remarkable community that is Leicester City Football Club. The playing squad joined Birch for one lap and manager Rodgers also took part. 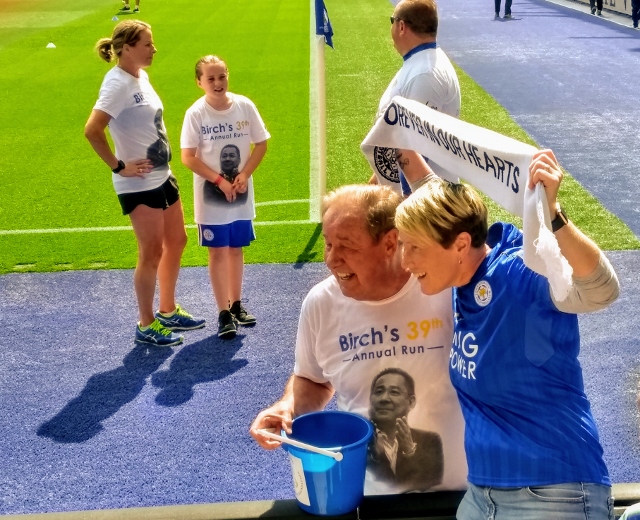 The game started with Jorginho fouling Vardy, the first of three first half fouls that eventually saw him yellow carded. Minutes later Jorginho played in Barkley whose fierce shot was turned aside by Schmeichel. Next Loftus-Cheek headed a Pedro cross over the bar and the early exchanges saw City on the back foot. However City came close in the tenth minute when Albrighton ran past Alonso but Choudhury volleyed the cross over the bar. 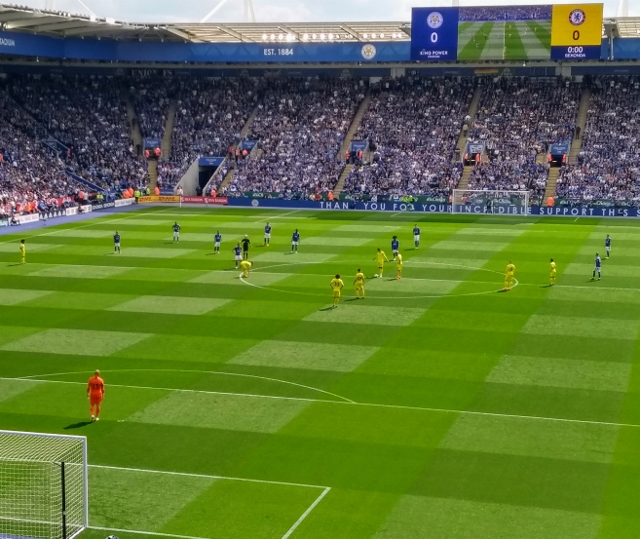 City retained possession across their back four but were finding it difficult to play the ball forward due to Chelsea’s high press. After one such occasion the excellent Loftus-Cheek seized on a loose ball and put Willian through but Schmeichel saved the shot smartly. 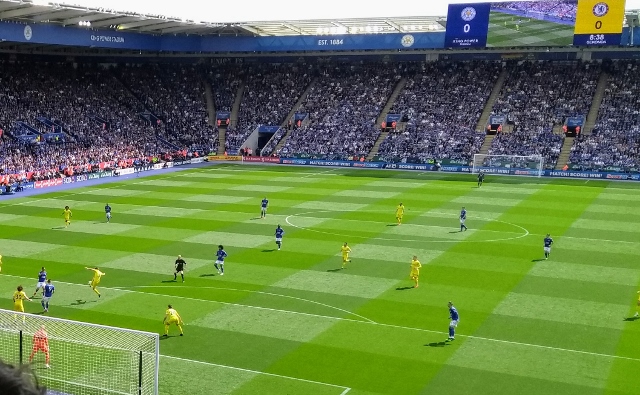 Around the twenty minute mark City started to look more comfortable. Choudhury lifted the crowd with his aggressive, ball-winning tackling. David Luiz was at full-stretch to cut out an Albrighton cross after good work by Pereira. Then Vardy put in Chilwell whose left foot shot was saved by Caballero. 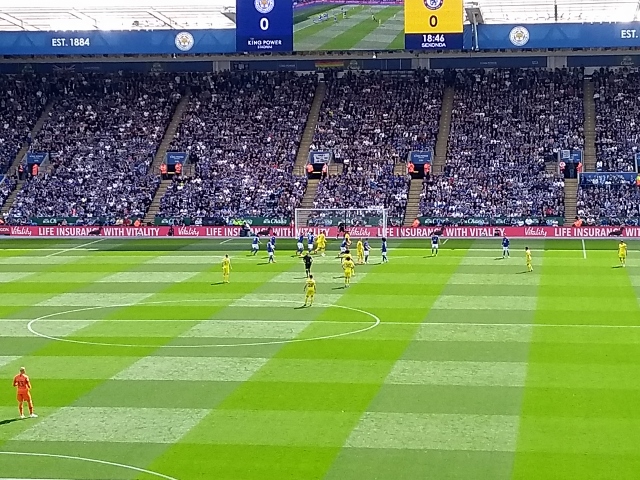 A superb City move involving Evans, Chilwell and Maddison saw Vardy played through but he was just caught offside. A Maddison corner picked out Tielemans on the edge of the area but Caballero coped assuredly with the shot. At the other end Choudhury’s awareness was welcome when he took the ball from the overlapping Zappacosta in the City penalty area. Willian then played in Higuain who shot wide. Maguire blocked a Higuain shot and then thwarted a Chelsea break after Zappacosta had beaten Chilwell. At the other end Maddison delayed his shot by just a second following excellent play by Pereira and the chance was lost. 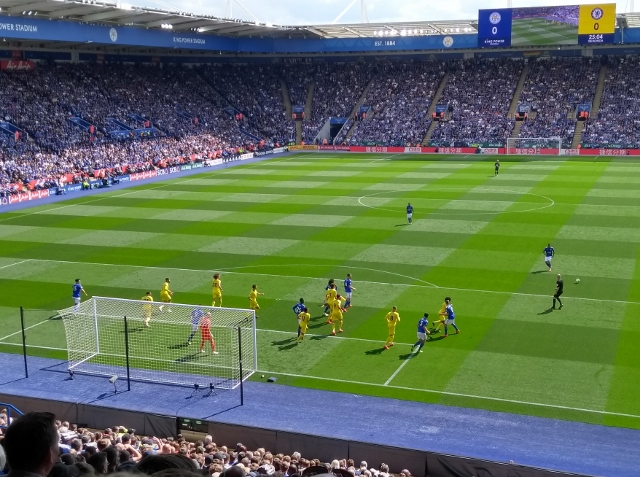 Just before half-time Vardy broke past the Chelsea back line. With the crowd expecting him to shoot he chose to play in Tielemans but overhit his pass and Caballero was able to snatch the ball. The best chance of the half was still to come. Willian and Alonso combined and set up Higuain in front of goal but he sent this gilt-edged chance past the post. 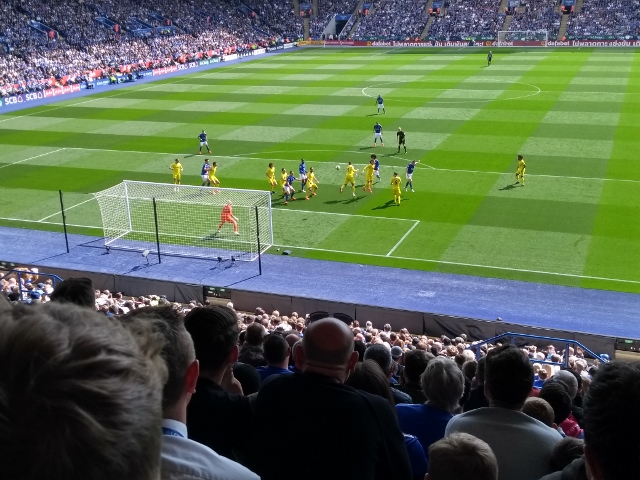 The second half started with Azpilicueta left behind by a Vardy run. The Chelsea man did well to track back and block Vardy’s attempt. Loftus-Cheek’s clearance from the ensuing corner fell to Tielemans but his volley flew just wide of the goal. Chelsea replied with a good move but Alonso’s distance shot presented no danger. Barkley then attempted a shot that went just outside the post.

In the 57th minute another sweeping Leicester move involving Albrighton, Vardy and Tielemans led to a corner from which Ndidi won the header but the Chelsea defence cleared off the line. Maddison then reached the by-line but his excellent pull back was cleared.

In the 66th minute Rodgers replaced Ndidi with Okazaki for his last appearance in a Leicester shirt. The crowd gave a warm ovation to this stalwart of the title year. Chelsea withdrew Willian and put on Hazard – for what might turn out to be his last appearance in the premier league. Barkley then shot from outside the area but the City defence held firm blocking out the danger. 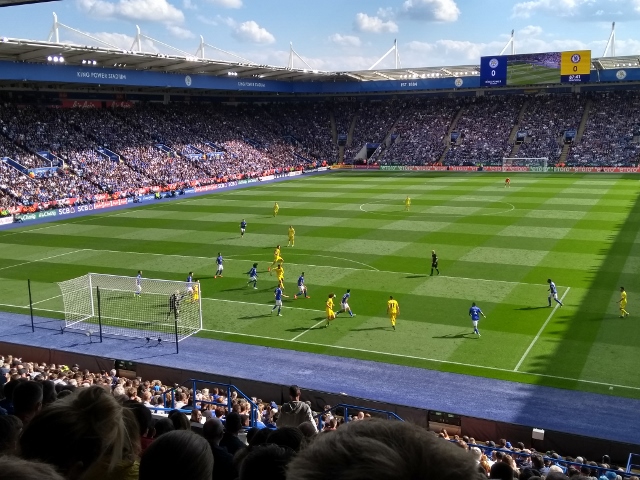 Danny Simpson, another mainstay of City’s title season, came on to a great reception replacing Mark Albrighton with Pereira pushing forward. Chelsea continued to probe with the dribbling of Hazard a constant threat. But City were still in the game. A lung-bursting run from Chilwell saw him cover just short of the length of the pitch to make the Chelsea bye line. Sadly his excellent cut back was met by a mass of Chelsea shirts.

Rodgers put Barnes on for Maddison and the young winger set up a chance for Tielemans but his shot went too high. Both sides maintained their efforts to the end but the game finished goalless.

So City finished ninth. In the ten games since Rodgers took over they have won five, drawn two and lost three. An average of 1.7 points a game which had City averaged that figure over the season would have harvested 64 points. “Ifs” count for nothing of course but fans will look forward to Rodgers ensuring better winning consistency at home to support the drive for an improved position. Many fans remained to show their appreciation of the players in what has been a distinctly draining season following Vichai’s death in October. 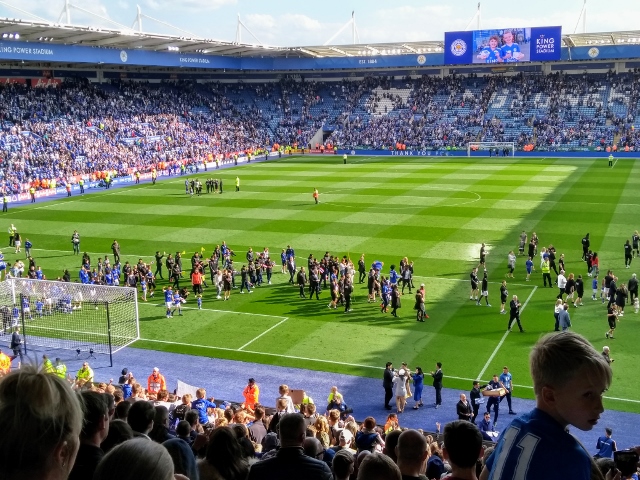 Rodgers was clearly taking the positives from the game and from his management of the team so far. "They want to learn. We beat Arsenal, played well against Manchester City and got a point today. People thought we would not get any points from the last three games. It's been a nice induction into the club – the players have been good and the supporters. We'll now add that bit of depth to the squad."

There are some encouraging statistics such as Ndidi making the most tackles in the league (143) and Maddison creating the most chances (100). The talk in the stands after the game and during half time was about recruitment and retention of playing personnel. One lesson from the game came in the danger constantly posed by the high quality wing skills of Willian and Pedro. If we are to seriously challenge for top six then that calibre of player is needed as well as a support striker for JV.