Due to some technical problems with our old website following a hacker attack, a few website articles were written but not published, so for information we are publishing over the coming week while LCFC has no fixtures

This was an excellent free admission curtain raiser to the season as the club open up its doors to the community. The activities advertised included the Leicestershire and Rutland County Royal British Legion Pipe Band, A Community Cup (with the winners having the right to play at the stadium), Various Community Related Displays/Presentations, Leicester Sound DJ along with the Black Thunder Crew, Disability football display, Fun fair, Bouncy Castle, Children’s Activities and Face Painting

In addition to the above, the most popular two activities were

A behind the scenes tour of the tunnel area and changing rooms…..

Probably the most two surreal moments were seeing Tim Davies on a Rodeo Horse style fair ground ride (and he managed to stay on it for quite a while) and also Chairman Andrew Taylor queuing with his children to take them on one of the stadium tours.

The Foxes Trust Board was out in force with five out of the eight members in attendance at the Foxes Trust stand at the event (with the other three only not being there purely due to holiday and work commitments).  In addition to using our stand to sign up new members, we also operated a tombola style fund raising activity, predominantly aimed at the younger generation (many thanks to everyone, including Rab Douglas for buying some of our tickets!).

The tombola boosted Trust funds by £162. We would like to thank Corgi Toys who donated several of the prizes.

The event greatly enhanced the fact that the club state one of their main aims is to be community orientated, long may it continue say both the Foxes Trust and the estimated excess of 10,000 fans who attended.

For more information on either the day itself or Foxes Trust in general please contact me at the email address below: matt.davis@foxestrust.com 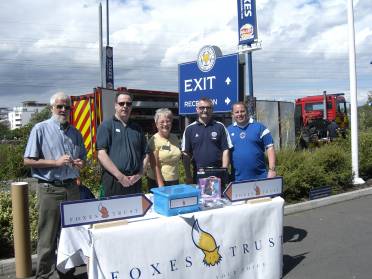