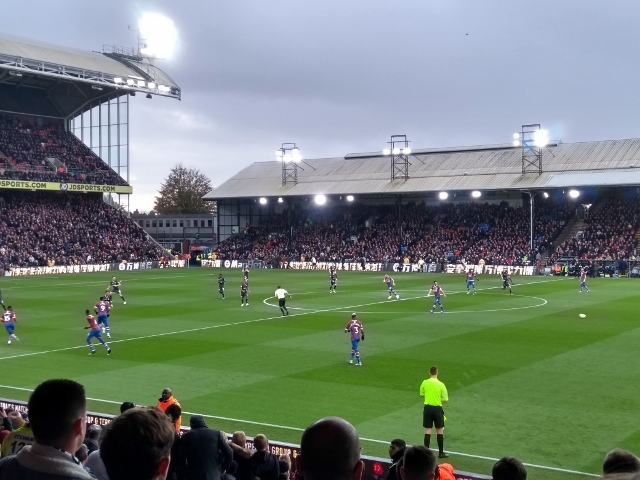 With the other three teams in the Top 4 of the Premier League all winning on Saturday, it was up to City to get a positive result if they were to regain third place. If this added to the pressure then it never showed as The Foxes produced a solid and accomplished performance against The Eagles.

Selhurst Park has never been a happy hunting ground for City; their 1-0 win in the Premier League winning season of 2015/16 being the only success in recent times. For those who know this part of South London they will know that it is a run-down area. The ground itself is befitting of the area and is old and antiquated with poor seating, inadequate facilities; it is a lot of visiting supporter’s least favourite away fixture. 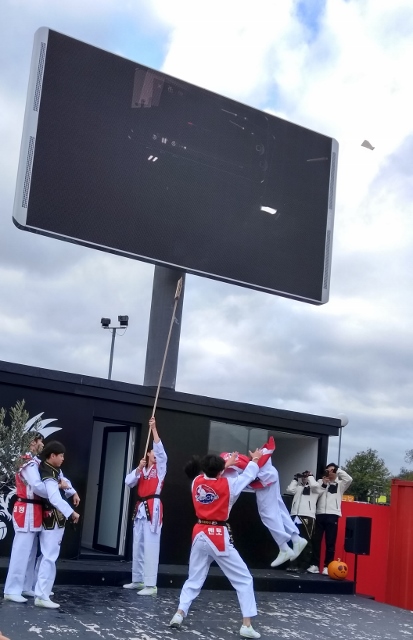 One saving grace is the fanzone which is open before the match to both home and away fans; on Sunday we were entertained by a South Korean Children’s’ Taekwondo troupe and also the Palace Cheerleaders. So apart from the fanzone not an exciting prospect for Sunday afternoon; not until 4.00pm that is. By then City had climbed back to third place and put on a performance that underlined their top 4 potential. 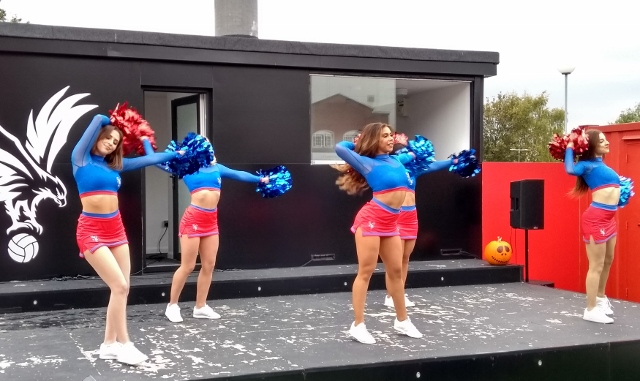 There were many heroes, Soyuncu and Maddison were immense, but for me the ever improving and consistent Tielemans is increasingly important to this team. The fans’ song suggests that Youri is ‘… dynamite’ but it does him an injustice as he is so creative and in no sense destructive: If Rubens is perhaps the most famous Flemish artist then Tielemans must have come from the same school: his art palette is a rich array of passing ability; short, long on the turn, first time.

Yet the creative play can only prosper if built on a sound defence. The centre back pairing of Evans and Soyuncu provide a rock in front of Schmeichel, Ndidi does the hard miles in front of them, all this allowing Ricardo and Chilwell to attack like wing backs. Certainly, Palace had their moments but like ships in a storm, their attacks broke up as they floundered on the rocks: Schmeichel had no shots of note to save.

Prior to the match there was a minute’s silence to remember the dead of the British Forces; impeccably observed apart from one idiot amongst the home crowd. The match started with Palace attacking the Holmesdale Road Stand which houses most of their singing supporters.

It was City first into their stride and in the 5th minute Barnes was to have a shot on goal from outside the box but it didn’t trouble the Palace goal. The first chance of note came on 18 when a good through ball from Maddison put Vardy in on goal, his touch took him too close to the goal and, at a narrow angle, Guaita was able to block the shot. 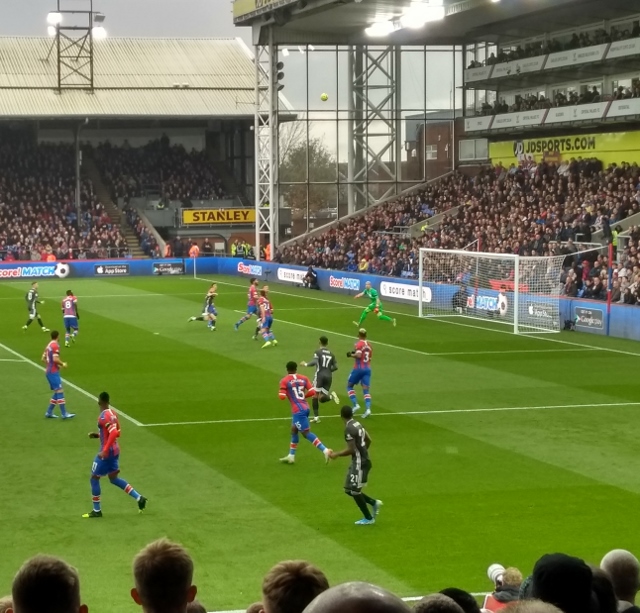 City were building pressure and winning a series of corners; from one of these Jonny Evans headed narrowly over. Palace eased the pressure on their goal with a couple of shots up the other end but both went helplessly wide of target. The game was stopped for a minute as plastic objects were thrown onto the pitch and had to be cleared from Schmeichel’s goalmouth; not really what you expect at Palace. 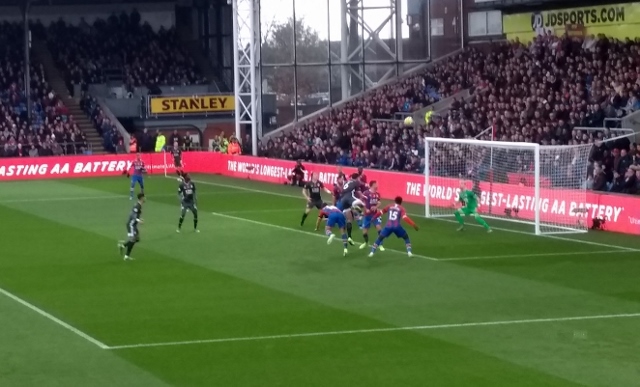 City then got another corner, the ball fell outside the box to Tielemans whose shot was high over the bar: Tielemans and Soyuncu then had shots off target. A high clearance from Maddison in his own box was met, but not completely controlled, by Vardy on the half way line; the ball seemed to break off a Palace defender and put Perez in on goal. Perez did not have the pace to get away and let the defender get back to him when perhaps he should have got a shot away. Vardy was put through after an initial pass from Maddison to Tielemans who in turn split the Palace defence; unfortunately, Guaita just got to the ball before Vardy. 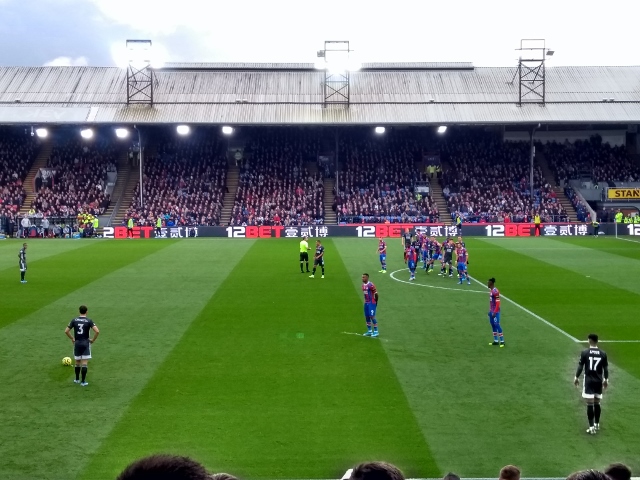 The second half started with Palace having their best period and a bad tackle by Evans on Kouyate earned him a booking but prevented a Palace attack. 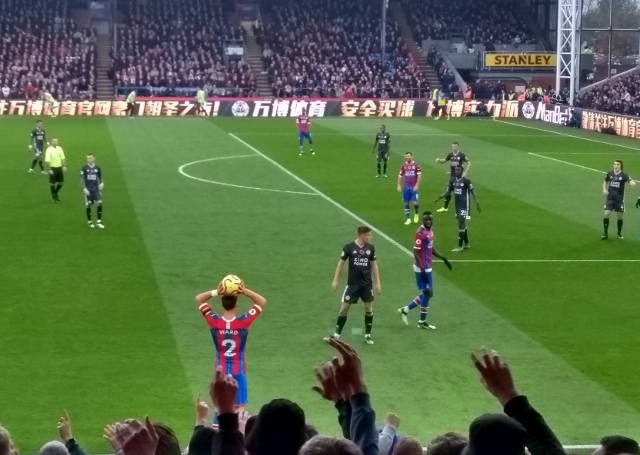 By the 56th minute though City had ridden out the brief storm without any real problems. Perez went on one of his mazy runs past several defenders before winning a corner. From the corner, Evans got in a great header but it was pushed over by the Palace keeper. Maddison took the corner again and van Arnholt got a touch on the ball and diverted it to the unmarked and stooping Soyuncu to make it 1-0. What a popular goal scorer Soyuncu was!

Vardy was his usual menacing self and caught Tompkins out as he closed him down. Falling to the ground, Tomkins knocked the ball away with his hand to prevent Vardy getting away; as the incident was only just in the Palace half of the pitch, and a defender may have got back, the yellow card issued was probably correct.

City were looking comfortable and containing Zaha and Ayew but one goal is always not enough to relax too much. Leicester had to wait until 88 minutes for their second and what a goal it was. Good passing into the box, Gray dummied, the ball reached Vardy who played Gray in again; Vardy playing clever had stayed near the penalty spot and was unmarked as Gray pulled the ball back to him; City 2-0. Palace fans had failed to heed the danger when they sing about Vardy or his wife: they hadn’t learnt the lessons of the Burnley and Southampton fans; punishment inevitably follows swiftly afterwards. Vardy wheeled away flapping his arms like an Eagle. 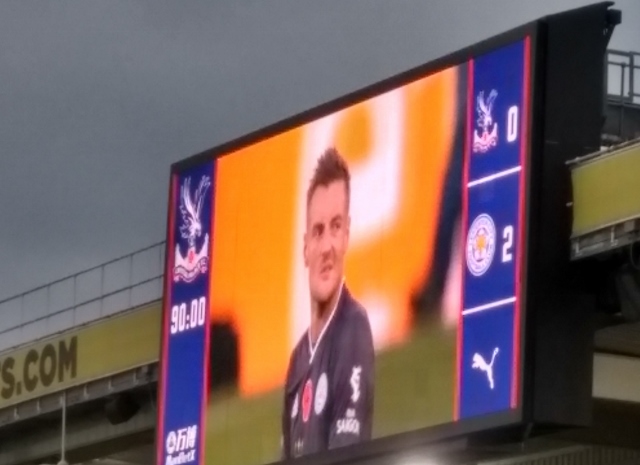 There was just time for another City chance as Chilwell controlled brilliantly a high cross field ball and his shot from a narrow angle hit the far post and shot back into play just avoiding Vardy. The six minutes of added time brought no more pressure on the City goal in what had been a most promising display that they controlled for the vast majority of the match.

In the 2017/18 season, City lost 5-0 to Palace. At the end of the match, Adrien Silva went over to some young Portuguese fans in the home stand near the City fans. He took off his shirt, gave it to the youngsters and was loudly booed by unforgiving Leicester fans who thought it was unwarranted given the result and performance. On Sunday, virtually in the same spot were some Belgian fans. At the end of the match Tielemans went over to the fans and had a selfie with them. This time the City fans cheered him: funny how you can be are more forgiving when you win: after all, Youri is dynamite. 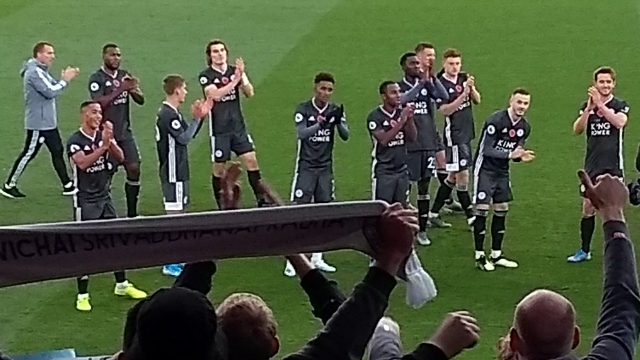