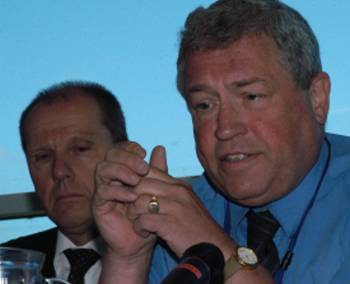 Peter Jones – Ex Referee and now of course our Supporters Liaison Officer at our own club.Peter spoke about his role as a referee, the referee system in general (including his role as an assessor) and also his role at Leicester City and what that entails.  An excellent speaker, humorous whilst remaining very informative, Peter kept the audience enthralled throughout, before having to dash off at the end of the session to referee one of the Masters tournaments in London!

Darren Bernstein, Customer Services Manager – The Football LeagueA northern lad (Bury Fan) with an excellent and dry sense of humour, Darren mainly spoke about the various aspects of his role and included within his talk the complexities of the preparation of a football fixture list.  Believe me when I say that when you see the huge amount of ‘ifs’ and ‘buts’ that go into preparation, you’ll appreciate that it is far from a simple exercise

Reverend John Boyers, Director of the Score Charity for Club ChaplainsAgain a very informative talk from John (who is Manchester United Club Chaplain) detailing both his own role and the role of club chaplains in general.  The content of the talk in respect of his own role was along similar lines to that of our own club chaplain, Bruce Nadin, details of which are currently being serialised elsewhere on this web site. For more general details on the score chaplaincy charity please refer to the following web site: www.scorechaplaincy.org.uk

Dr Martin Kunz, Fair Deal TradingDr Kunz is responsible for importing fair deal footballs into this country, as well as selling associated items such as fair deal football kits.  Dr Kunz explained the ethos behind the fair deal brand (being best explained by the story detailed immediately below entitled the story of a fair-trade football stitcher) before going in to talk in detail about how a good football is made (32 hand stitched quality panels) before speaking about how modern balls are moving towards 16 glued panels – hence the larger degree of (arguably unnatural) swerve on the modern ball. For more details please refer to the relevant website which is www.fairdealtrading.com

The story of a Fairtrade football stitcher

Sameena Nyaz is 18 years old and lives in Chak Gillan near Sialkot, the 'world capital of football production' in Pakistan. Sameena is the fifth child of her father, who runs the snack shop in the football stitching centre 200 m away, which was built in her village by Talon, the first Fair Trade football supplier. Sameena stitches footballs for a living, stitching wages are usually low – however the Fair Trade wage pays a decent income which enables her to properly provide for her family. Recently Sameena has had to undergo a thyroid operation. All medical costs were paid for by the Talon Fair Trade Welfare Society – the health care scheme made possible by the Fair Trade premium, a first for workers like Sameena and her family. A proportion of the cost of this Fair trade football has contributed to the Fair Trade premium, supporting people like Sameena and their families in Pakistan.

Workshop 1:Entitled Zen & the Art of Trust Accounting, this dealt with all the fundamental financial aspects of Trusts, covering such things as:

·   The Audit , ·   The Independent Examination, ·   Model set of accounts, ·   Tax Issues and Trusts, ·   The Finance Pack for Supporters Trusts

Foxes Trust members should be assured that our finances are in safe hands as although this workshop was led by Richard Lillicrap, a Supporter Direct Director and a Dawe Anderson Limited representative, he was ably assisted throughout by our own board member for finance, accountant Paula Aldred..

Look out for the next article, a review of all the other Workshops which took place during the day.