1.  Tim Davies welcomed everyone and introduced Milan Mandaric who was attending his first Consultative Committee meeting.

2.  The full committee was in attendance.

3. The minutes of the previous meeting were confirmed as a true and accurate record.

4.  Matters arising :TD confirmed that a road show would be taking place April 24th and also a school event on May 1st.

5.   Milan Mandaric thanked everyone for their warm welcome and talked about his takeover of the club. He said he was frustrated with the timing and had hoped he could have been here earlier. This would have allowed him the opportunity to introduce additional players to the squad in preparation for next season. Having said that he understood that the negotiations had to be completed correctly and throughout the discussions he understood that Leicester City Football Club was the most important issue and not one individual.

He followed up by saying this is a great club with great support as witnessed by the fans reaction in the match v Birmingham City. He confirmed that significant investment will be made in the playing squad. In addition he will be looking to make the club more efficient, cost effective and generally put the club in a financially strong position.

He said that he did not expect the club to be in this position with 3 matches remaining. He had witnessed some encouraging performances particularly Fulham, Coventry City, Ipswich Town and West Bromwich Albion and he was surprised at the recent sequence of results.He reflected on the result and the performance at Plymouth Argyle and decided to act to change the manager. Nigel Worthington was approached and accepted the challenge of keeping the club in The Championship for the final 5 matches.

Mr Mandaric answered questions from the committee on a number of topics including:The arrival of Nigel Worthington and Doug Livermore.The appointment of a permanent manager.His time at Portsmouth FC.Plans for next season and the playing squad…..

END_OF_DOCUMENT_TOKEN_TO_BE_REPLACED

The Foxes Trust is pleased to announce that it is sponsoring the Academy Player of the Year Awards at the Awards Gala Evening tonight (Wednesday 2nd May) at the Walkers Stadium, working alongside the NatWest bank as joint sponsors.

Commenting on the Awards Sponsorship, Ian Guyler, Trust Board Member for Business Liaison said “We felt sponsoring these awards was a further way we could contribute to the long term future of our club and naturally follows our work this year on our Corporate Membership scheme which has seen a number of businesses show their backing for both the Trust and the Academy by joining the Friends of the Academy scheme through the Foxes Trust”

Guyler added “The success of our Corporate Membership scheme also builds on the foundations laid by the Trust’s Player Sponsorship syndicate which has seen the Trust sponsor Richard Stearman, James Wesolowski, Chris O’Grady and most recently Joe Mattock”

What a difference a week makes – before the Preston game I couldn't see us winning, today I couldn't see us not winning – and the upbeat mood was certainly in evidence with the bumper 4,000 following in sunny Yorkshire. There was a 'last day' feel to proceedings, and a nostalgic feel as I filtered in to the singing army that were being marched to the ground from the train station by friendly coppers.

Both teams only realistically needed a point for safety, but it was clear straight from kick-off that there was no West Germany-Austria World Cup 1982 style fix going on. The first half was played at a high tempo but with neither keeper tested, unchanged Leicester generally looking the better team with everyone conveying an impression of knowing what their role was and being confident in their ability to do it, the youngsters Mattock and Wesolowski catching the eye.

The game came to life early in the second half when two surprising events conspired to give us the lead. Firstly, the linesman kept his flag down after a dozen previous offsides and Matty Fryatt lobbed the advancing keeper. The covering defender looked to have an easy job to head the ball over his own bar, but instead he tried to divert it wide and only succeeded in heading it into the corner of his own net. Cue wild celebrations as safety became all but guaranteed. Barnsley did fight back as the game opened up, Stearman was out of sorts again as the Tykes exploited his flank, but stout defending and solid goalkeeping kept the sheet clean. At the other end, we managed to blow several promising breakaways, Newton being denied by two fine low saves.

It was all doom and gloom in the home end as the Barnsley fans anticipated a final day showdown, but then something rather splendid happened. It's not often both sets of fans can be simultaneously happy, in fact I've only seen it happen in 3 instances, here they are in reverse order:

2nd: Dog or other animal on pitch, players have to chase it

1st: Leeds conceed late equaliser to seal their own relegation……

END_OF_DOCUMENT_TOKEN_TO_BE_REPLACED

On Sunday 13th May the Trust is running it's annual 5 a side tournament in the Dome at Belvoir Drive.

If you haven't read about it previously, this year all profits are going to the Radio Leicester Ruby Rainbows Appeal.

We are close to finalising the teams taking part (get your entry in quickly if you plan to submit a team), however currently we are short of referees for the day.

If you fancy volunteering to referee some games on the day, please e-mail john.adcock@foxestrust.com

Alternatively, if you know of anybody who may be willing, then either ask them or pass on their details to John.

It is a worthwhile cause, so we hope you can help our search & make the day a complete success

The Foxes Trust is pleased to announce that the syndicate set up by the Trust and funded by each syndicate member contributing an equal amount, is now the first team sponsor of Joe Mattock for the rest of the 06/07 season.

Originally the Trust syndicate sponsored Chris O’Grady, until his transfer to Rotherham, but now the syndicate has taken on sponsorship of local player Joe Mattock after his elevation to the first team squad and his encouraging performances following his debut against Norwich.

Trust Board Member & syndicate member Matt Davis said “We are pleased to continue our association with the emerging talent from the Academy. Alongside our growing Corporate Membership scheme, which has generated additional funds for the Academy this season, it demonstrates the Trusts aim of backing the long term future of the club." 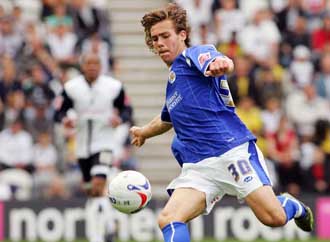 “Our first team sponsorship of Joe Mattock for the remaining games of the season is a prelude to being his sponsor for next season, when we hope he becomes an integral part of a successful side”.