What a great game. At last some excitement on the pitch, noise from the crowd and passion from everyone.

Ian Hume hit two fantastic goals from outside the box, one with his left foot in the first half to give city the lead and the second with his right to restore the lead in the second.

Typically as soon as we had scored we tried hard to let Southampton equalise and whilst they squandered two clear chances just before half time, they scored with the most difficult of the three chances (still a gift though) in added time to go in to the break at 1 – 1.

We had several opportunities to add to the first half tally, with Elvis (he looks lively but is he a striker?) scorning one, Nissa (I am only on first name terms with him because I can't spell his surname, who looks comfortable at left back) missing one and various other skirmishes around their goal.

Hume's second (I really do want to have his babies when he plays like this) put us back in front from another example of more space than he has had all season….

END_OF_DOCUMENT_TOKEN_TO_BE_REPLACED

The new deal, worth just under £1.8 million pounds, is testament to the enormous growth and success of the organisation which boasts over 140 trusts in England, Scotland and Wales and 14 clubs in trust ownership or control.

Sports Minister Richard Caborn said: "It is the loyal supporters on the terraces who will always be the beating heart of sports clubs. I am delighted that this new funding deal will help extend the influence of football Trusts in local communities while increasing and developing their role across all sports.

"This is a tremendous vote of confidence to Supporters Direct and the vital work sport fans have achieved through SD over the past five years."

The increase in funding will enable SD to provide a significantly enhanced level of support to supporters' trusts, to help them build their capacity and help them deliver an improved level of governance and financial control within their clubs….

END_OF_DOCUMENT_TOKEN_TO_BE_REPLACED

We recently published a feature about the Garden of Rememberance at our ground. Due to a growing number of fans wishing to be commerated there, the garden has recently been expanded.

Before the new area comes into use, a brief dedication and blessing will be performed. This will take place prior to the Southampton game this Saturday at around 1.15pm, and be conducted by Club Chaplain Bruce Nadin.

All fans are welcome to join the occasion.

Following Milan Mandaric recently severing all ties with Portsmouth, The Foxes Trust has reacted to the renewed speculation linking him to a takeover bid for Leicester City.

Ian Bason, Chairman of the Trust said “Obviously for any individual or team of investors looking to run a football club, Leicester City is an attractive option, with first class facilities ready made for Premiership football. The club has recently been run as a tight ship, keeping debt under control, while being undercapitalised, so that combination means it is a desirable proposition. The new Sky deal further increases the attractiveness of taking a mid table Championship club back to the Premiership”

Bason added “We would welcome any investment that is in the best interests of LCFC, its supporters & local community. However we would need to see the detailed proposals of any potential major investor, should they come forward, before commenting further”

Bason continued “Should a bid be launched, we would not make any snap decisions on backing a bid based on the reputation of any individual, we would need to look in detail at such things as plans for owning the stadium, ensuring fans won’t be priced out of attending games, as well as the more glamorous topic of funds for players……

END_OF_DOCUMENT_TOKEN_TO_BE_REPLACED

Well you can't say that City are not fighters, they played magnificently. In the first 10 minutesthey would have scored if Elvis Hammond had been on the pitch. We do badly need some height in the box. The only thing we appeared to be lacking is a goal scorer. Hume (and Fryatt) are both fast but don't have a heading ability.

The first half our defence was like a brick wall. Every time Birmingham launched an attack McCarthy was there, (whether it was left, right or centre of the box). In my opinion he was certainly man of the match. 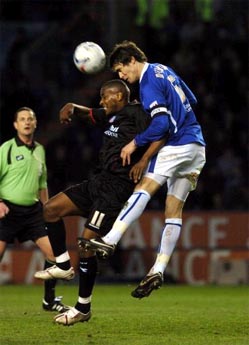 A very close second to McCarthy had got to be Logan, he made two magnificent saves in the first half and again several more after the break. Their goal was lucky, we relaxed for a couple of minutes. I was still confident that we would go on to win the match with the fighting spirit we displayed (as usual)….