One of the objectives of writing match reports is to describe a match to people who were not there.  When the match is being shown on live television, one is writing a match report on something which many people will have seen more clearly than you.  So, what to focus on?

Firstly, the ludicrousness of the only televised Premier League game of a Sunday being at 4.30pm, and requiring Newcastle fans (more on them shortly) to have a long drive down in poor driving conditions, followed by a drive back that presumably leaves many of them not getting home until midnight.  There really is no excuse for this, and Sky TV should be ashamed of choosing fixtures like this for such a time slot.

Secondly, the armchair watcher does not get to experience the joys of a walk to the ground in a drenching downpour, followed by a couple of hours sitting in trousers which dry very slowly.  Here’s a thing: if you bash your clapper on your thighs throughout a match onto very wet trousers, you end up covered in a coating of white cardboard flecks.  This is not a fan experience to repeat at home. 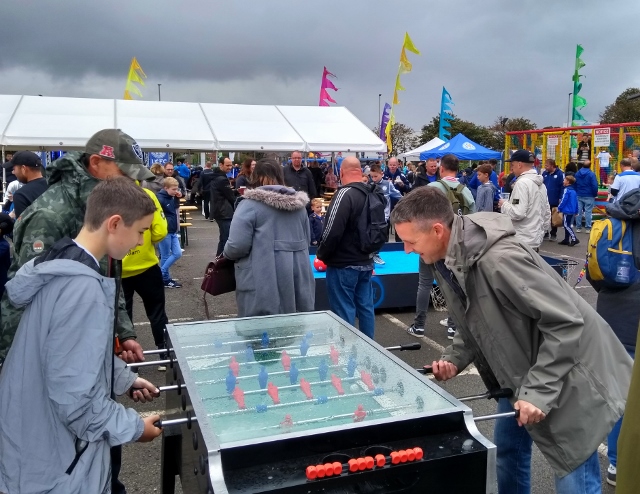 Thirdly, the armchair watcher will not have seen the first appearance of the new City fan-zone, set up in one of the old car parks and including a bar and an open-air big screen.  It was a shame the weather was so appalling for its first outing, but the awnings made for good rain-shelters.

Finally, the Newcastle fans but, like I said, more of them later …

And as for the match itself?  The previous four league meetings of these clubs had resulted in away wins.  If City were to lay a good claim to the task of breaking into the top six, or top four, this was the sort of match they needed to win.  Their cause was apparently not helped by Maddison being unavailable through injury, Praet replacing him in the City line-up.

The match kicked off in a downpour, complete with swirling wind, that lasted until half time.  Even Row X could feel the rain as it was blown under the roofs of the stands.  It kicked off with City facing ‘the wrong way’, Newcastle having presumably won the toss and deciding to put the home team out of their familiar zone.  The impact of this did, indeed, lead to an unfamiliar start for Leicester: the team moved straight into gear from the off, with Perez almost scoring against his former employers as early as the second minute.  The first ten minutes or so was very open, with both sides passing quickly and both sides looking a bit open defensively, but then Leicester took control and never lost that control for the rest of the match. 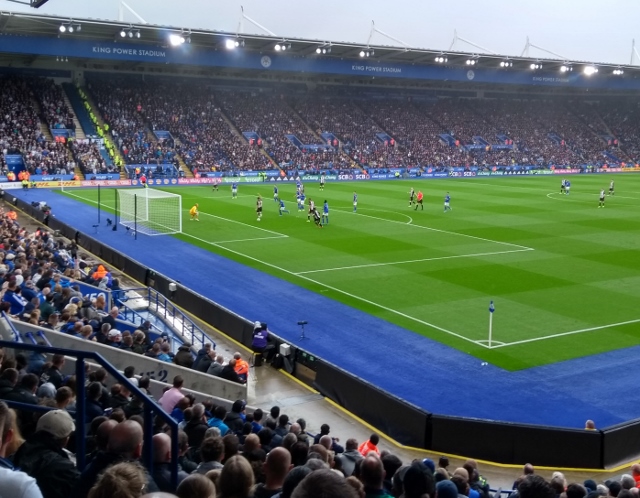 I’m not sure that Vardy had even touched the ball before playing a helpful role in City’s first goal.  A neat flick by Perez found Pereira on the half-way line.  He ran through a posse of Newcastle defenders, each of whom assumed he would play the ‘obvious’ pass to a space-creating Vardy.  He didn’t.  He curled a low, left-foot shot just inside the far post for an excellent opening goal for City, and his second in successive league games. 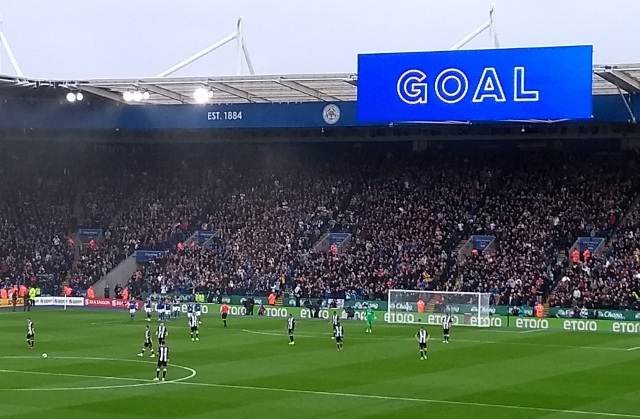 Barnes and Chilwell had oodles of the ball, looking an almost permanent threat to the ponderous Newcastle defence.  City pressed well, with Vardy even earning a yellow card for the kind of ‘just a bit late’ tackle whilst chasing a lost cause that he used to rack up every other game earlier in his City career.

By the half-hour mark, the weather was getting even worse, but City continued to dominate.  They were faster to almost every ball, faster in thought and stronger.  They then appeared to be slowing things down in anticipation of half-time when the next key incident occurred.  Messy play by both sides led to the ball falling loose just outside the City box.  Hayden lunged for it rashly, going through the ball and hitting Praet’s leg hard.  It was a clear red card: not a deliberate attempt to hurt the opponent, but it was reckless and dangerous and for a couple of minutes it looked as though Praet might be seriously hurt.  Thankfully he was not. 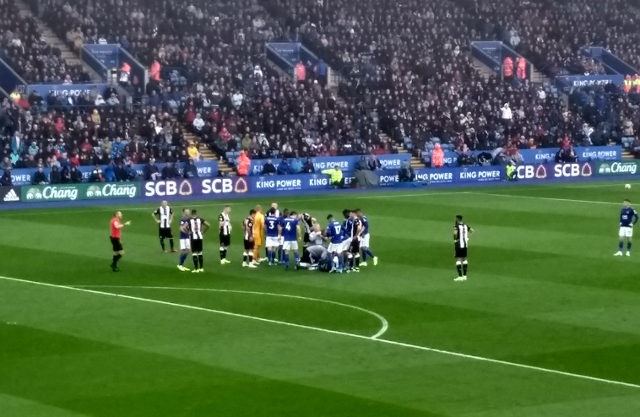 Steve Bruce made an immediate tactical substitution, bringing on Ki for Muto, even as Hayden continued to complain about the referee’s decision.

There was no half time entertainment for the crowd in the stadium.  Whether that was due to the still -appalling weather, we will never know. 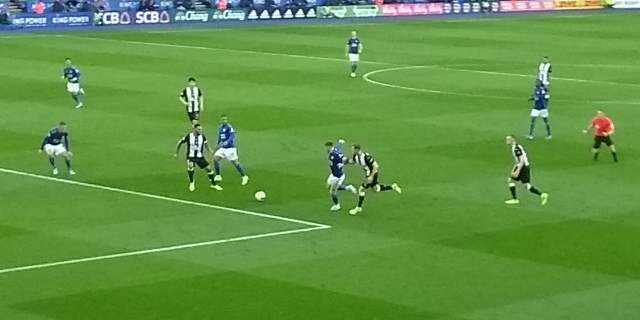 The second half was as one-sided a game of football as I have seen for some time.  The easing of the downpour from the clouds was matched by an acceleration of the downpour of City chances.  In the 54th minute, a long ball over-the-top found Barnes on the left, his immediate pass to Vardy found the striker with a seemingly-impossible angle from which to fashion a shot, but fashion a shot he did, with Dubravka arguably at fault for allowing enough space between himself and the near post for the ball to score.  It was one of those occasions where many fans thought that Vardy must have hit the side netting, only to then see the ball in the back of the net. 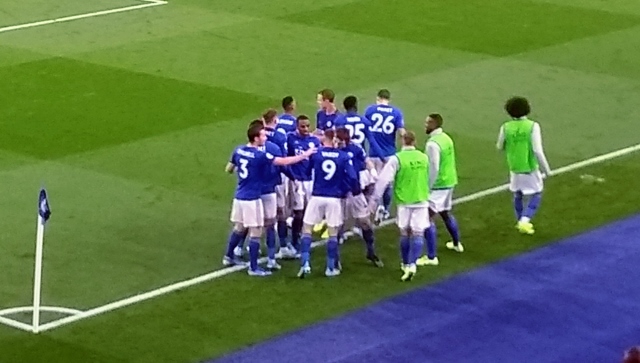 A couple of minutes later, it was three-nil.  Praet found space inside the Newcastle penalty area, his cross-shot taking a big deflection off a defender to leave Dubravka stranded. 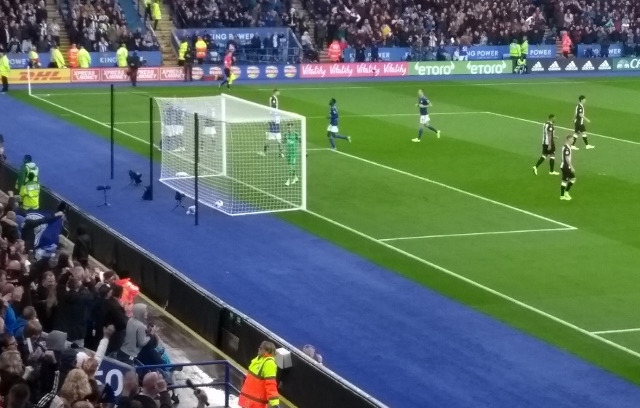 Rodgers replaced Barnes with Albrighton.  Barnes had a good game and was unlucky not to have either scored or created more.  Albrighton showed immediately the kind of winger he is: creating havoc with his first substantive touch of the ball before following up, five minutes later, with a straightforward left-wing cross that picked out an on-rushing Vardy to complete an easy header to make it four-nil. 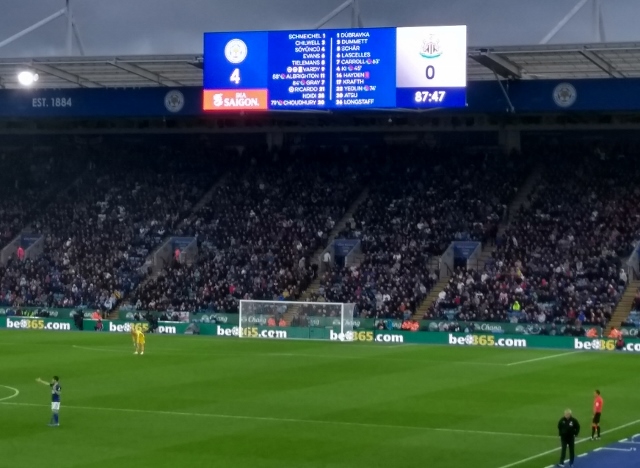 Newcastle had been looking abject after the second goal was conceded.  Bruce chose to bring on Carroll to spice up the attack, replacing Joelinton and, whilst the match was still no contest, Newcastle did begin to try to play the ball forwards more assertively for the last ten minutes.

Choudhury replaced Praet for the home team.  The Belgian looked a more-than-decent player in this performance, calm at all times and tidy in all that he did.

The rain began to fall again, Yedlin replaced Almirón for the visitors.  Gray replaced Perez.  The former Newcastle player had a decent game, with a number of flicks and a few tackles noteworthy.  He has yet, to my mind, shown that he is a winger, but maybe that will change as he gets more opportunities.

The game looked destined to end at four-nil, but in the 90th minute a Chilwell cross found Ndidi – apparently via the feintest of touches on Evans’ head – his back was to goal, he had time to turn and shoot well to complete the scoring at five-nil. 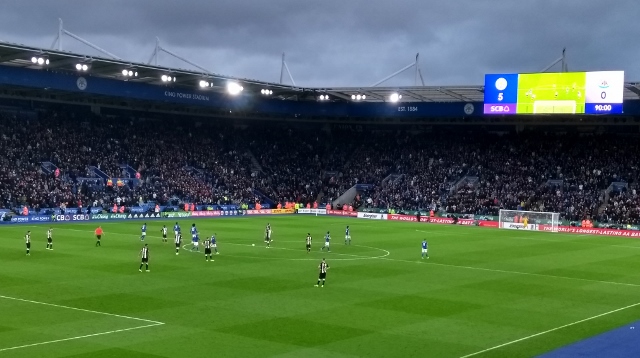 City had looked in control at one-nil and eleven-versus-eleven.  As the match continued, they simply looked a different class to a slow, uncreative Newcastle team.  Schmeichel had precisely zero shots to save in the whole match. So, the bad parts of the Toon Army?  A team that only once looked like it might score in the entire match and with a defence and midfield which was out-paced, out-thought and out-played by City for almost the entire 90-minutes.

And the good parts of the Toon Army?  The fans … not only for such a good turnout for a televised Sunday game with a long journey to and from, but also for the noise they made and for sticking with their team.  Almost no Away supporter left the ground before full-time, and for most of the second half, as City’s second, third, fourth and fifth goals were scored, it was the travelling fans who were making the most noise.  Their may be a little bit of gallows humour (Gallowtree Gate humour, maybe?) in it, but it was still impressive stuff.

City sit well in third place, and the home fans are singing of a European Tour, Dilly Ding, Dilly Dong and all.  One does not want to jinx it so soon in the season, but today the team warranted that thought.