Before the match there was some reminiscing amongst the older supporters of the 4-0 FA Cup victory at Luton in 1974 and, of course, that Keith Weller goal. On that occasion, the thousands of City fans stood on the open terraces at The Kenilworth Road end. The old open terrace is now roofed and for home supporters only, the away fans now situated at the opposite end of the ground (The Oak Stand) on seats fixed to old terracing; so close to the row in front that anyone above average height is likely to incur sore knees. 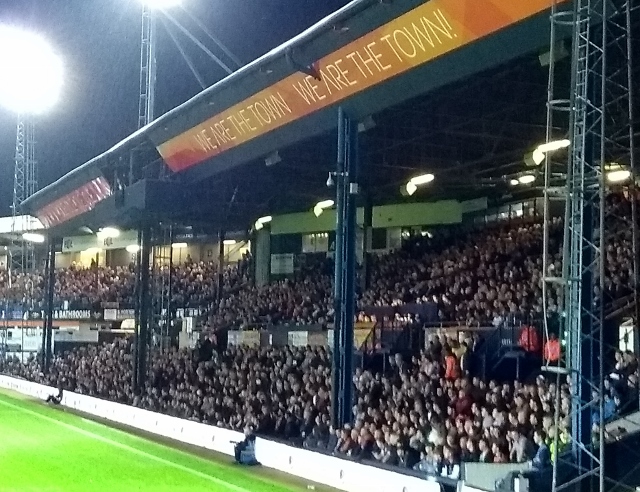 In the intervening 45 years, nothing else has changed or improved at the stadium. One of the accesses to The Oak Stand is along a very narrow alley way between the terraced houses and The Bobber’s Stand which is a row of executive boxes. When entering the ground, the view is very poor as there are so many steel pillars supporting the roof that, as some wag commented, ‘there is probably more steel in Luton’s ground that in Sydney Harbour Bridge’. Yet for all this there is some charm about the place, the stadium has its own identity, a journey back in time. Plans for a new stadium were passed in January this year, the club have been looking to relocate since the 1950s. 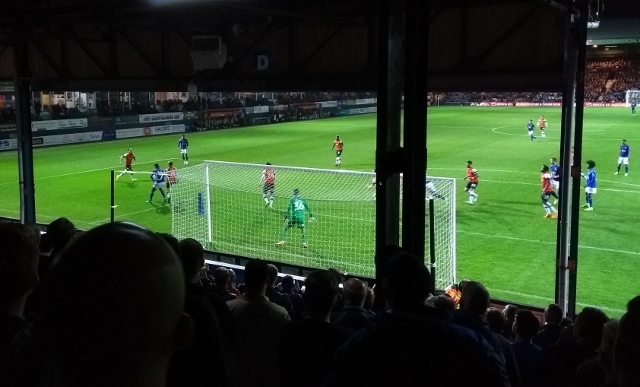 With Luton 21st in the Championship and on the back of a 3 nil home defeat to Hull, and The Foxes third in the Premier League and having just beaten Spurs, this always looked like it should be a match the visitors should win. Their task was made easier by 10 changes to the Hatters’ starting eleven as manager Graeme Jones gave the team that conquered Cardiff in the previous Round another chance.

Brendan Rodgers himself made seven changes to his starting X1 with only Evans, Ndidi, Perez and Tielemans remaining from Saturday’s team. Such is the depth in the City squad that the replacements included players of the quality of Choudhury, Fuchs, Albrighton, the increasingly impressive Praet, and debutant James Justin. 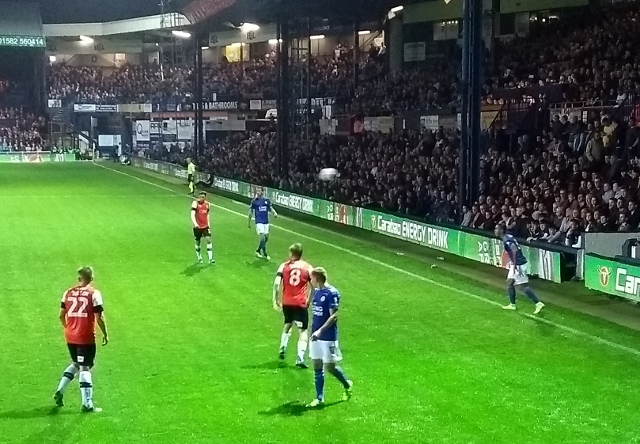 City started the match defending the goal in front of their fans and were quickly into their game. It looked like a 4-1-4-1 formation with Perez the lone striker, Luton had a 5-man midfield in front of their back four yet they were being overpowered. Marc Albrighton was particularly prominent in the early stages having a shot well saved by Shea, down low at the foot of the post, and then setting up chances in quick succession for Perez and Fuchs. Gray and Justin were combining well and both possessing excellent pace, at the quarter of an hour mark Justin put Gray through who’s attempt on goal was blocked.

With all the City possession (70%) and the rising tally of shots, it was a surprise that the breakthrough took 34 minutes. A corner was taken by Albrighton, low to the edge of the six-yard box, it was cleverly flicked back by Perez, under pressure from the defender, into the path of Gray who struck the ball into the net. 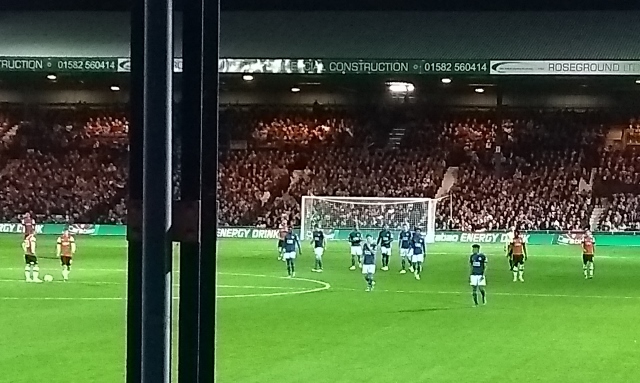 Ten minutes later City doubled their advantage after Tielemans made a trademark pass to pick out the onrushing Justin to score on his Leicester debut following his £7m summer move from the Hatters. What followed then was quite bizarre as the Kenilworth Road faithful joined in the applause and started singing ‘… he’s one of our own’.

Shots from Perez and Tielemans followed before a foul on Albrighton led to a free kick in Maddison territory. Gray took it and, although he connected well, the ball was straight at the keeper who saved comfortably. Half time came and City were comfortable but there was a sense that a Luton goal could change things.

As the teams came out for the second half the stadium announcer did his best to raise the spirits as he said ‘come on Luton we can still win this’, his rallying words fell on deaf ears though as the fans seemed to accept the inevitability of the result. There was to be no Luton revival and no goal.

Gray was again prominent in the space of a minute shooting wide, first from a corner and subsequent retrieval and cross from Evans, then being set up by Ndidi. It was still all City with the shot tally soaring. The most notable being on 58’ when Wes Morgan played a one-two with Ndidi on the edge of the box before he got his shot away from 10 yards only for Shea to save well low down. If a video clip exists of this move it should be sent to FIFA 20 as proof that Morgan’s pace deserves a rating far in excess of the derisory 29 points they awarded. 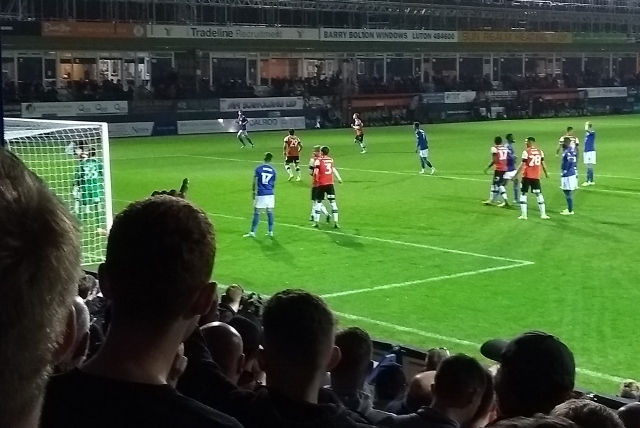 67 minutes gone and Luton registered their first shot, Leicester had 21 attempts at this stage; if it had gone in it might have changed the complexion of the game. Bolton set up Brown whose fierce shot was turned away by Ward’s foot in what was to be his only real test of the night. On 71’ there was a bit of disappointment in that Perez was substituted for Iheanacho. Perez desperately needs a goal to kick-start his season and this could have been a great opportunity. However, it was to be the substitute who benefitted. On 79’ Iheanacho was set up by Justin and he was fed through one-on-one with the keeper, stumbling as he went through and off-balance, his shot was saved by Shea. Somehow the City forward won back possession and the ball found its way via a Luton defender to Gray who crossed to Tielemans at the far post who rifled the ball into the net from 7-yards.

If Iheanacho had fluffed his lines then, he had another chance to redeem himself a couple of minutes later but his shot from the edge of the 6-yard box was saved well.

The final goal came on 86’ as good pressure from Iheanacho and then Albrighton caused panic in the Luton defence.  Albrighton’s interception fell into the path of Iheanacho and his chip from the edge of the box found the net, although the keeper got his fingertips to the ball, he could not prevent the goal. The relief for the striker, his team mates, the fans was palpable, the year long wait for a goal was over. 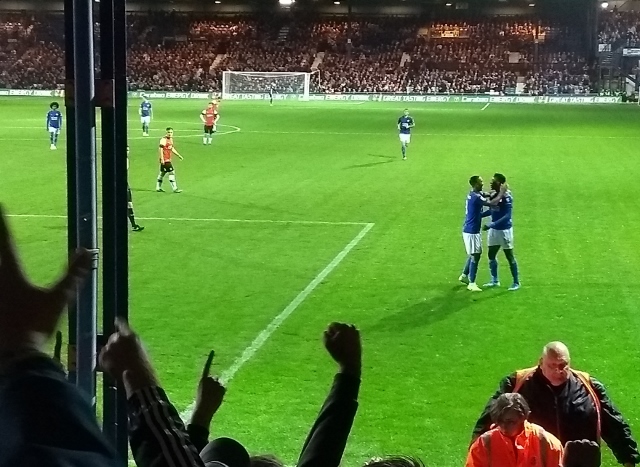 All in all, a solid City performance albeit against an average Championship side. A fantastic return to Kenilworth Road for James Justin, Praet looking increasingly good, and a big improvement in Tieleman’s performance. Perez’s game is improving but needs his goal, perhaps it might come on Sunday against The Toon. 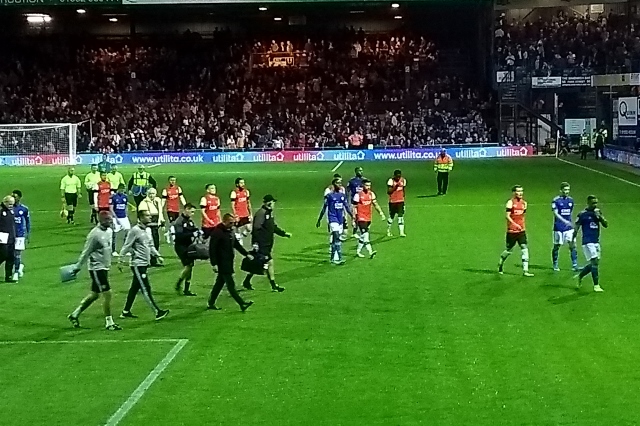