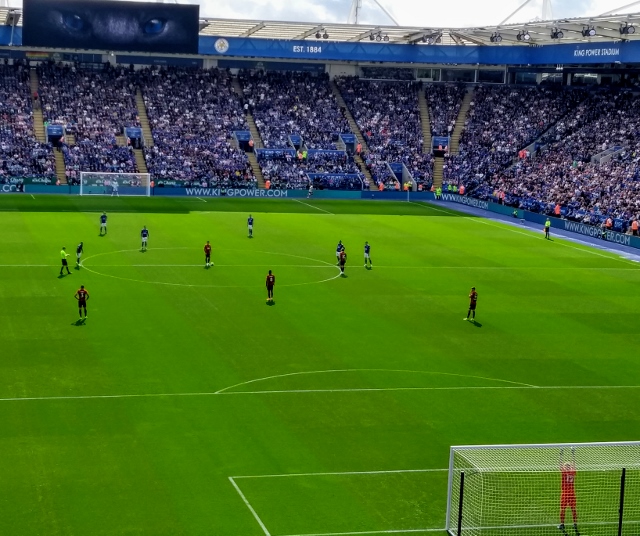 Jamie Vardy aka The Pest lived up to his nickname at the King Power today with a brace of goals, the first and the third, and an assist for the second scored by midfielder Tielemans in a convincing win over Bournemouth, lifting City into a very satisfactory third place in the premiership table. Bournemouth to their credit played a much more open game than previous visitors Wolves though there is no justice in football and Wolves negativity earned them a point whilst the Cherries had ultimately nothing to show for their efforts.

Bournemouth started well but with the risky plan of playing a high line, compressing the play but leaving them vulnerable to the ball over the top. City for their part played two wingers, Barnes and Albrighton, for the first time this season at the beginning of a game, not a formation we are likely to see at most away games. Today it worked and we scored three and frequently threatened to get more so it will be a case of horses for courses. 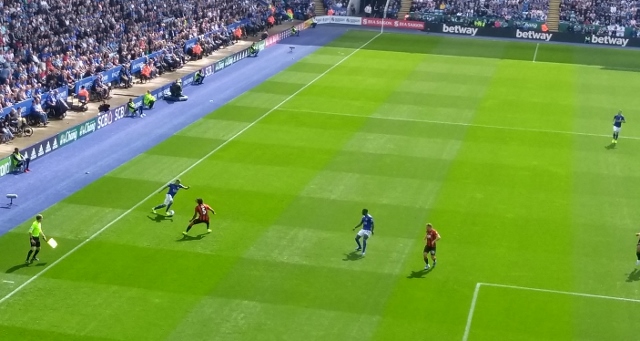 Bournemouth’s vulnerability to an accurate long ball was unveiled as early as the 12th minute when Chilwell, restored to the side after a hip problem released a gorgeous through ball from near halfway. Vardy allowed it to bounce before lobbing it over the advancing keeper from the corner of the box, the ball landing on the full in the corner of the net neat as you like. A skilful finish made to look simple.

The Cherries responded well to this setback and were level within four minutes. Callum Wilson, in whom City are said to be interested, ran well off the ball when supporting a quick thrust by Ryan Fraser who slotted the ball through to him for an excellent corner of the net finish. At this stage no more than they deserved but this was to be the high point for City’s opponents as Leicester gradually took the upper hand. 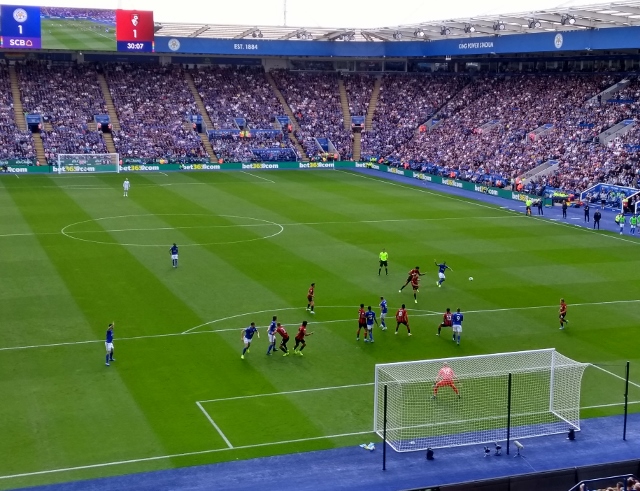 Vardy was unfortunate not to have a simple chance to put City ahead again when their keeper fluffed a clearance under pressure from the striker but the ball rebounded off the falling Vardy and went straight to the keeper lying prone on the turf. Bournemouth profited but briefly from this piece of good fortune before conceding a crucial second goal.

Vardy, inevitably, was released in the penalty area and worked his way along the goal-line, losing the ball in a challenge but characteristically regaining it in a flash before squaring across goal for the alert Tielemans to poke into the right corner of the net from close range. You need a cool head in such circumstances to find the killer pass and Vardy obliged in spades – an excellent lesson for younger players like Barnes and Gray for example. 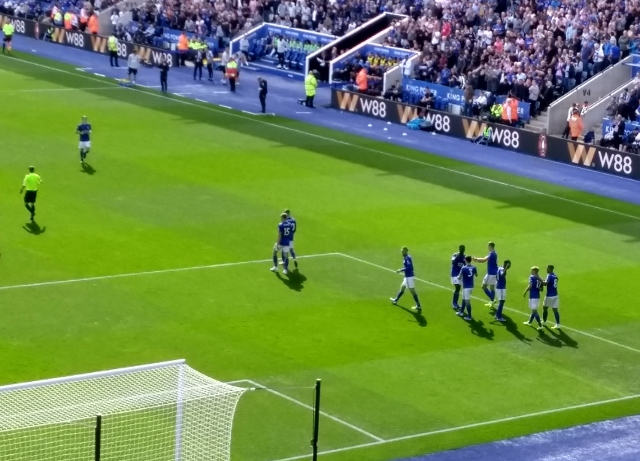 City were rather more dominant in the second half, organised in defence with Evans and Soyuncu again outstanding, and ever dangerous when the ball went anywhere near Vardy. Incredible when you think he was on the pitch for the whole midweek game at Newcastle. Today he was the heart- beat of this team. He thoroughly deserved the clinching goal which was a toe-poke from close range as the ball sped across the six-yard box.

Bournemouth never gave up but they were ultimately found wanting and City saw the remainder of the game out with Schmeichel untroubled apart from having to push a shot from outside the area around his left-hand post. Seven minutes of added time passed without need for anxiety 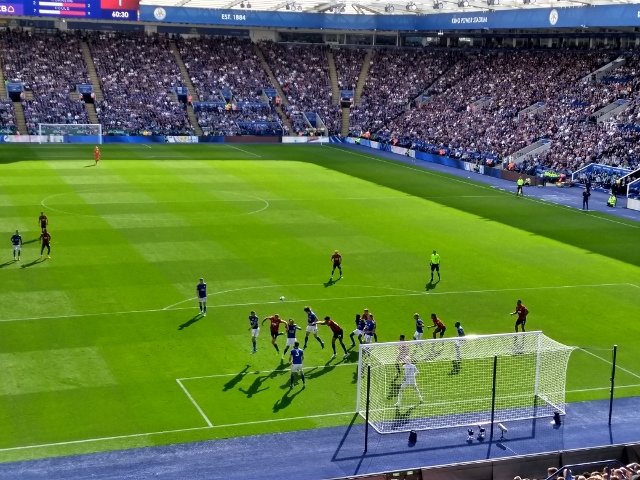 The seven extra minutes were largely due to the two VAR referrals in the second half, both some way down-field of where I sit. The first was the possibility of a red card for a tackle by Tielemans which aroused little passion at the time and frankly came as a surprise to most spectators. The call went Leicester’s way but shortly afterwards a Bournemouth player fell in the box under a challenge form Soyuncu and VAR swung into action a second time. The referee, a newcomer to the Premiership, had had a good game and promptly booked the falling player for diving. It seemed to me that there was minimal contact which the player tried to maximise, going down far too easily. Again VAR endorsed the judgment of the referee. 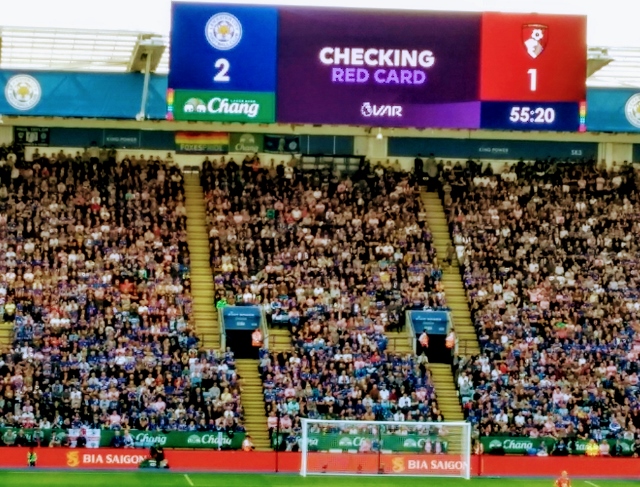 Like most others I am generally in favour of VAR, especially in matters of fact but it is not working well where it is a matter of judgement. I am particularly concerned that the emotional release when your team scores has to be restrained whilst you wait to see if VAR is going to be involved 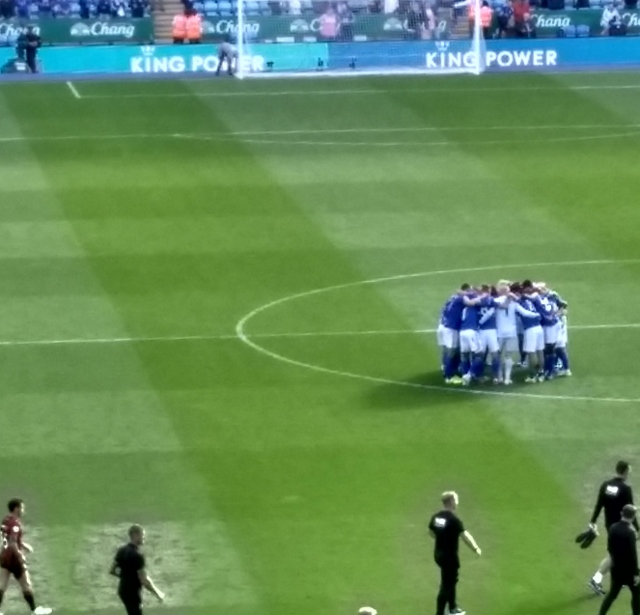